Ho Ho Ho? Fox & Friends ‘Santa’ Turns Out To Be Quite The ‘Dirty Old Man’ And ‘Pleaser Of Women’
video

Ho Ho Ho? Fox & Friends ‘Santa’ Turns Out To Be Quite The ‘Dirty Old Man’ And ‘Pleaser Of Women’ 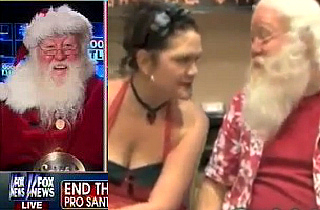 Yesterday morning Fox & Friends interviewed a man dressed as Santa Claus to ask for his feelings about the so-called “War on Christmas” that many conservative commentators believe is being waged by “secular America.” Turns out, the portly man in the red suit, Sal Lizard, is quite the horn-dog and self-described “dirty old man.”

Lizard is a professional Claus impersonator, and he’s written a book called Being Santa Claus to attest to his uncanny resemblance to the popular fictional Christmas character.

But a little digging on YouTube for videos featuring Lizard out-of-character yields a whole lot of lady-loving and dirty-mouth-having. The bloggers over at Douchechillz unearthed a bunch of the videos and parsed them for little lovable nuggets like:

Watch a mash-up that Douchechillz made of Lizard’s wholesome Fox & Friends with his pervy old man YouTube clips, below: