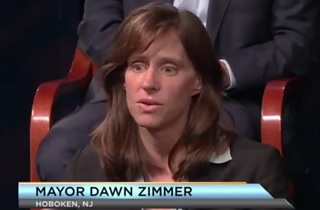 This weekend, Hoboken Mayor Dawn Zimmer (D-NJ) dropped the blockbuster allegation that New Jersey Lt. Governor Kim Guadagno and Department of Community Affairs Commissioner Richard Constable each made explicitly tied her city’s Hurricane Sandy relief requests to a real estate development deal. Barely two hours after she says Constable made his overture, and while seated right next to him, Mayor Zimmer was asked how “optimistic” she was about getting the grants her city needed.

Zimmer also says that New Jersey Department of Community Affairs Commissioner Richard Constable told her, of the Rockefeller Group project and the Sandy relief, “If you move that forward, the money would start flowing to you.”

That message was delivered jut before the two-hour live broadcast of Superstorm Sandy: A Live Town Hall, on May 16. Mayor Zimmer spoke several times during the special, discussing specifically the hazard mitigation plans for which she had sought hundreds of millions in funding, but received only a few hundred thousand. While Mayor Zimmer had complaints about FEMA’s policies, she never volunteered any information about how the state government was responding to her funding requests.

Toward the end of the program, however, NJ Today host Mike Schneider asked Mayor Zimmer directly, about grants for her city’s plans. Barely two hours after Zimmer says Constable reinforced Guadagno’s threat, with Constable sitting right next to her, Schneider asked Mayor Zimmer “You said ‘if’ and ‘grants’ and ‘money,’ are you optimistic that you can get all of that?”

Mayor Zimmer skirted the question about funding, responding “We’ve had a tremendous response on our Community Emergency Response team, we just completed a training program, expanding another training program, and we’ll be out there educating the public on how they can be prepared to stay within their home. And as people come in to get permits, and rebuilding, we’re advocating for them to build higher, build stronger.”

“And I’m certainly down talking to everyone in Trenton,” Zimmer continued, turning to Constable and adding, with a laugh, “I think they’re tired of seeing me.”