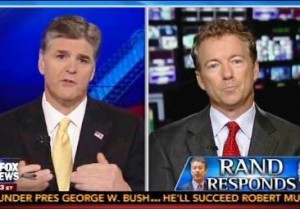 Rand Paul is used to getting attacked by his colleagues for his libertarian politics, so he responded to Chris Christie bashing libertarian Republicans on Hannity tonight with a sigh as he slammed the New Jersey governor for his “gimme gimme gimme” attitude towards federal aid and scolded him for giving off an air of superiority for his attitude that “I’m the only one who cares about these victims.”

Sean Hannity played the Christie video, and asked Paul for his response. Paul called Christie’s comments “not very smart,” considering how poorly the GOP is doing in the Northeast to begin with.

But beyond the political aspect of Christie’s remarks, Paul went after Christie for pushing what he considered to be a “dangerous” worldview.

“I would remind him that I think what’s dangerous in our country is to forget that we have a Bill of Rights, to forget about privacy, to give up on all of our liberty to say, ‘Oh, we’re going to catch terrorism, but you have to live in a police state.’ And it’s really, I think, kind of sad and cheap that he would use the cloak of 9/11 victims and say, ‘Oh, I’m the only one who cares about these victims.’ Hogwash! If he cared about protecting this country, maybe he wouldn’t be in this ‘gimme gimme gimme gimme all the money you have in Washington’–or don’t have–and he’d be a little more fiscally responsive and know that the way we defend our country, the way we have enough money for national defense is by being frugal, and not by saying ‘gimme gimme gimme’ all the time.”