Holder To NAACP: ‘Time To Question’ Stand Your Ground Laws That ‘Encourage More Violence Than They Prevent’
VIDEO

Holder To NAACP: ‘Time To Question’ Stand Your Ground Laws That ‘Encourage More Violence Than They Prevent’ 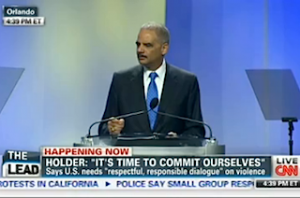 Speaking before a crowd at the NAACP’s national convention in Orlando, Florida Tuesday afternoon, Attorney General Eric Holder called into question “Stand Your Ground” and other self-defense laws that “sow dangerous conflict in our neighborhoods.” In light of George Zimmerman‘s acquittal indicated that the Justice Department would be examining the legality of laws that “contribute to more violence than they prevent.”

As he did Monday at an event at Howard University, Holder called for a “respectful, responsible dialogue about issues of justice and equality” from the African-American community, but also action to “prevent further tragedies.”

“It’s time to question laws that senselessly expand the concept of self-defense and sow dangerous conflict in our neighborhoods,” Holder told the NAACP audience. “These laws try to fix something that was never broken. There has always been a legal defense for using deadly force if–and the ‘if’ is important–no safe retreat is available. But we must examine laws that take this further by eliminating the common sense and age-old requirement that people who feel threatened have a duty to retreat, outside their home, if they can do so safely.”

Holder warned that as they are in place now, some self-defense laws could actually “encourage” rather than diminish violence. “By allowing–and perhaps encouraging–violent situations to escalate in public, such laws undermine public safety,” Holder said. “The list of resulting tragedies is long and, unfortunately, has victimized too many who are innocent.”

Evoking the language of the controversial law, Holder declared, “We must ‘stand our ground’ to ensure that our laws reduce violence, and take a hard look at laws that contribute to more violence than they prevent.”