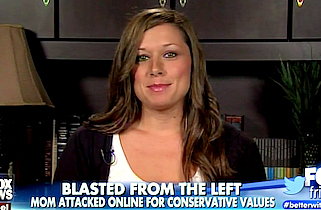 Holly Fisher, aka Holly Hobby Lobby (#branding), appeared on Fox & Friends Wednesday morning and expressed shock at the backlash from her two photos, the second of which, showing her holding a gun and a Bible before an American flag, bore an unfortunate resemblance to a photo of a certain jihadist.

Fisher didn’t appreciate the comparison. “It’s shocking for me that people would compare someone who is standing in front of our flag that represents our freedom on Independence Day. I’m holding my First and Second Amendment rights in my hand and it all represents freedom, and they want to compare me to a woman who is quite the opposite. She despises everything about this country and hates this country and would kill all of us if given an opportunity. I don’t understand where the logic comes from.”

Fisher’s campaign started with a photograph of her wearing a “pro-life” t-shirt before a Hobby Lobby store. She said she didn’t think she’d convince anybody on the left, but wanted instead to speak to conservatives who feel silenced because of their beliefs.

“It’s okay to stand up for what you believe in,” she said. “I feel like the last few years especially, there’s been a growing intolerance on the left, and conservatives have been afraid to speak up…I just want people to know, it’s okay. You’re not alone.”