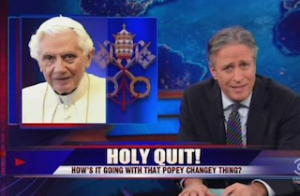 “How’s it going with that Popey changey thing?” Jon Stewart kicked off Monday night’s episode of The Daily Show with the biggest news story of the day: the surprise resignation of Pope Benedict XVI.

Speculating on why the Pope decided to retire prematurely, Senior Vatican Correspondent Samantha Bee reported that he may have been getting “catfished” by God all along. “The Pope is starting to question a long-term relationship with someone he talks to all the time, but has never actually met.”

After discussing the historical precedent of “long Pope, short Pope, long Pope, short Pope,” Stewart brought out Senior Catholic Correspondent John Oliver, who predicted the vicious Papal election to come and proposed some familiar candidates for the job. Perhaps GOP presidential candidate Mitt Romney is interested now that he has some free time on his hands. Yes, Romney “was a Mormon, but he’s evolved on that issue.”

And what about Texas Governor Rick Perry? He could be perfect for the gig, but unfortunately, as Oliver said, before playing an altered version of this infamous debate clip, he “has trouble remembering the Holy Trinity.”

When Stewart asked Oliver why so many Republican presidential candidates are in the running, Oliver asked sarcastically, “What would they know about appealing to a floundering organization, appealing to old white men, clinging to an arcane moral code who must reluctantly embrace change to stay relevant? You’re right, there’s not crossover there at all.” And since almost half of current Catholics are Latino, we could be looking at “Pope Rubio.”

Finally, Oliver predicted the most disturbing scenario of all, in which Pope Benedict XVI pulls a “full Leno” and tries to return to his post after the Catholic Church brings in a younger, fresher Pope. “And if that happens, I’m going full Team Popo on this.” 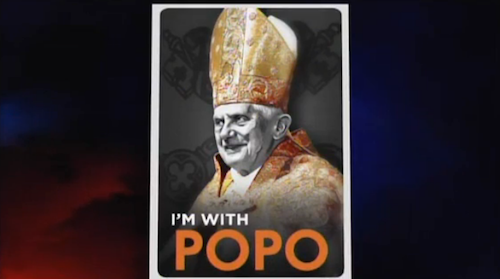 Watch video below in three parts, via Comedy Central: