WTF?! Interview With Senate Candidate And 5 Year-Old Son From Ad Is Creepiest Thing Ever
video

WTF?! Interview With Senate Candidate And 5 Year-Old Son From Ad Is Creepiest Thing Ever 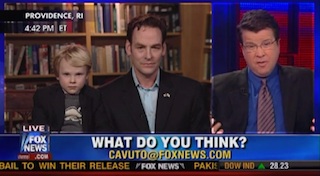 I don’t say this too often but, seriously, you might not want to watch this video if you don’t want to have nightmares. This is honestly the weirdest video I’ve seen in 2012. And I watch some weeeeeeeeird stuff during my non-work hours.

RELATED: CNN Follows Up With Senate Candidate On Creepy Interview With Son: ‘No Conspiracy Theories’ Afoot

This morning, the Internet was going gaga for an adorable campaign ad for Republican Senate candidate from Rhode Island, Barry Hinckley, in which his five-year-old son Hudson explained economic problems to the camera. Sure, it might be a little weird to use a kid for political gain like that and, sure, Hudson was obviously scripted and, sure, those posters he was showing were obviously written by an adult pretending to have “kid” handwriting, but the ad was just so darn cute. However, the interview Hinckley and his son just did with Neil Cavuto wasn’t cute. It was just…unsettling.

Look, I don’t even need to talk about the uncomfortable, Balloon Boy-esque moment where Cavuto asks Hudson if he actually cares about the economy, the boy replies “no,” and Hinckley looks furious. That’s weird enough. But the only thing I can see during this segment is the fact that, every time Hudson talks, Hinckley MOUTHS EVERY WORD HE IS SAYING SIMULTANEOUSLY.

There are a few possible explanations.

Either way, this video is absolutely insane. I need to go wash my eyes out.

Watch the clip (or don’t) from Fox News below: