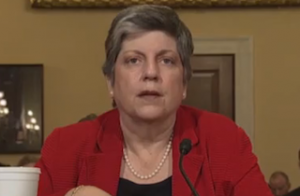 Homeland Security Secretary Janet Napolitano was ostensibly appearing before the House Homeland Security Committee this morning to discuss her department’s 2014 budget. But the hearing took a different turn when Rep. Jeff Duncan (R-SC) began questioning Napolitano about a particular conspiracy theory he has been reading about on “reputable news sources” like Forbes and The Drudge Report.

Duncan raised the issue of the Department of Homeland Security supposedly stockpiling ammunition to prepare for an attack on American citizens, a theory that has been making its way around certain conservative circles. “You know, when Forbes Magazine or Drudge or some reputable news sources start to repeat the numbers,” Duncan asserted, “the numbers cease to become Internet rumors and they start having some credibility.” He proceeded to ask Napolitano, “why was there a long delay or silence from the DHS for a period of time, almost three months, before y’all came forward saying these numbers aren’t correct, these are the actual facts?”

Secretary Napolitano immediately shut down Duncan’s suggestion about a delay as well as the theory itself. “Well I don’t know about that, that there was that kind of delay,” she responded, “but I will tell you we found it so inherently unbelievable that those statements would be made it was hard to ascribe credibility to them.” Working in a small dig at The Drudge Report, she added, “I don’t know if I’d put Forbes and Drudge in the same sentence.”

Napolitano has had a somewhat contentious history with The Drudge Report, which famously highlighted a story claiming the DHS was run by a “lesbian cabal.” And, early last year it was revealed that The Drudge Report was among the websites that Homeland Security is “monitoring.”