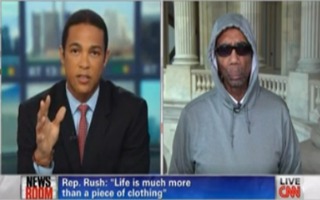 Rep. Bobby Rush (D-IL), fresh from his appearance on the House floor in hoodie and dark sunglasses in solidarity with slain Florida teen Trayvon Martin, appeared on CNN with Don Lemon again in hoodie and sunglasses. “This family lost a son, but they have gained a whole generation of children who are protesting in the streets, walking out of schools – they are doing what they need to do to make their voices heard” said Rep. Rush. “They do not want to be the next Trayvon Martin.”

“I just wanted to express, a hoodie is nothing but a piece of clothing,” said Rep. Rush. “It has nothing to do with character. Yet still Trayvon Martin lies dead partially because he was a black man wearing a hoodie in a white neighborhood.”

An increasingly animated Rep. Rush moved on to the appearance of racial bias and injustice in the Martin case. Rush recalled how his son was shot and killed in 1999 and how it moved him to be an activist in Congress opposing the proliferation of guns and police brutality.

Lemon played a clip of House Minority Leader Rep. Nancy Pelosi (D-CA) who was asked about the incident on Wednesday. Pelosi, who is celebrating her 25th year as a Congresswoman, recounted “when I first came here 25-years-ago… women were not allowed to wear pantsuits on the floor. That was a violation of decorum.”