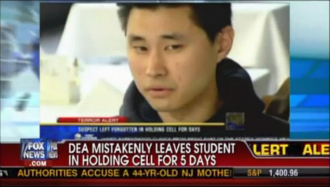 On Wednesday’s America Live with Megyn Kelly, Trace Gallagher reported on a rather disturbing story from America’s wildly successful War on Drugs:

[UCSD student Daniel Chong] was at a friend’s house celebrating April 20th, which is a day that marijuana users set aside to smoke pot. The next day, the DEA raided the house, took him and eight others down to a local DEA office where there were five holding cells. He was questioned and then told he was free to go. He was even offered a ride home by one of the agents, but instead he was placed into one of those holding cells for almost five days [with] no food, no water, no human contact.

Chong reportedly screamed and pounded on the walls for days, with no response. Eventually, he says, he was forced to drink his own urine as a means to survive. For food, he ate a white powdery substance, which turned out to be methamphetamine. Eventually he decided to try suicide: he busted his glasses and swallowed the glass, perforating a lung. He used some of the glass to carve his arms.

When agents finally opened the door, he was non-responsive. During the three days he spent in intensive care, his kidneys reportedly neared failure.

The DEA admits they lost him and are investigating the matter. As of Gallagher’s report, the DEA had yet to comment, but now a San Diego DEA official extends his “deepest apologies” to Chong.

Ah! So this must be an example of what former Drug Czar John P. Walters deems “quite effective” measures of drug control!

Check out the report below, via Fox News: