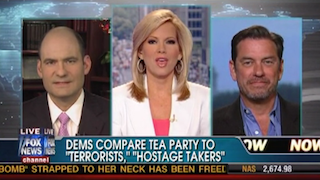 Are we really in a new age of civility? Does one political party use more vicious attacks than the other? Is the term “terrorist” that much worse than the term “hostage taker?” These were some of the questions posed in a Fox News panel on political name calling this afternoon and, while I’m not sure any of them were actually answered, credit should be given to frequent sparring partners Christopher Hahn and Chris Plante who got through a whole round of bickering without calling each other any names themselves.

The segment used the recent spate of Democrats referring to the Tea Party as “terrorists” as a starting point as well as a clip of our very own Tommy Christopher asking Jay Carney what the difference was between those insults and the barrage of remarks referring to the party as “hostage takers.” Hahn had no problem with the hostage comments since, in his opinion, that’s exactly what the party did. He didn’t blame them though because he felt that they just didn’t really know any better.

Meanwhile, Plante was unsurprised by the insults, indignantly claiming that Republicans never make comments of those kind. Unsurprisingly, Hahn had some issues with that theory. In fact, Plante should probably be glad he said that today and not a week earlier since the clip would make a perfect inclusion in this Daily Show bit.

Watch all of this as well as the pair’s thoughts on Sarah Palin and the Arizona shooting in the clip from Fox News below: