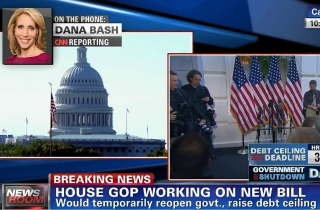 With negotiations to lift the debt ceiling entering the 11th hour, House Republicans are putting together what may be their last proposal which would avoid having to acquiesce to a Senate deal that includes almost nothing in the way of concessions for conservative representatives. House Republicans need a plausible way in which they can claim the government shutdown was not an abject failure, but defunding the Affordable Care Act or delaying the individual mandate are nonstarters. With this in mind, the House Republicans are taking aim at one almost universally reviled group to force their Democratic colleagues to acquiesce to their demands: themselves.

On Tuesday, CNN reporter Dana Bash detailed the contours of a bill being crafted in the House that would reopen the government through January 15 and raise the debt ceiling through to February 7. The House conservatives are still pushing for changes to the ACA – a must-get for the House GOP in order to justify what is up to now a wholly unjustified government shutdown.

“This bill would take away employer help, and by “employer help,” we mean the federal government because they’re obviously federal employees,” Bash reported. “Employer help for buying the health insurance if they’re going through the exchange.”

While it is a controversial measure, it targets all the right enemies. Congress is acutely aware of their low approval ratings. A measure which self-flagellates but also targets the ACA serves a variety of political goals.

Furthermore, by dropping the provision within the Vitter Amendment which would eliminate the employer subsidies for staffers in Congress and the White House, the House Republicans may have avoided alienating members of the press.

The thousands of staffers who populate Washington and interact on a daily basis with the media were seen as being unfairly targeted by Republicans simply for working for an institution which suffers from a low public approval rating. By eliminating that provision, the press cannot claim that anyone other than the members of Congress are being targeted by this provision.

In concert with the provision which delays the medical device tax within the ACA for two years and ensuring the enforcement of income verification requirements for those enrollees seeking subsidies for their insurance plan, the House conservatives should (operative word) be mollified. They sought reforms to the ACA and they got all they could. Will this deal pass the Senate? Nothing has been introduced, the language has yet to be written. It would certainly be tough to vote against.

And the Senate simply has more to lose in than the House. What is shaping up to be a sharply anti-incumbent year in which the electorate appears to favor neither Republicans nor Democrats disproportionately, the electoral winds are blowing erratically. But, according to some political scientists like George Washington University Associate Professor Lara Brown, the Senate’s incumbents are more likely to feel the brunt of the voter’s angst than most House members serving in heavily gerrymandered districts.

So, if the House passes this final deal and it dies in the Senate, Republicans will have a pretty effective talking point heading into 2014: members of Congress brought the country to the brink in order to protect their subsides within Obamacare. Even if such a proposal fails in the Senate and the House is forced to pass a “clean” debt ceiling increase, this talking point will survive into the midterm election cycle.

It’s a line strong enough to make that hearty 5 percent of adults who still approve of the national legislature to rethink their support.