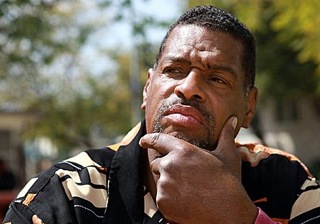 Add another tale of surrealism to the great canon of American art that is the fame arc of former Republican primary frontrunner Herman Cain. Upon the launch of Cain’s new online network Cain TV on Wednesday, viewers and critics alike appeared to be immediately captivated by one program in particular– a show called Street Smarts with Lewis Brown, a homeless man with a lot to say. The show, like some other CainTV programming, was a relaunch of a segment from the now-defunct RightNetwork, but Brown had courted the national spotlight before — in a profile in the New York Times, no less — published before the start Lewis’ posthumous career as conservative new media star.

Before he came to national attention this week with the launch of his top-billed CainTV show, Brown was a basketball prodigy who fell off the wagon and landed on a sidewalk in Los Angeles. CNN’s Kyra Phillips spoke to Cain yesterday and asked how he found Brown, a “very interesting individual.” Cain replied:

One of my producers and videographers, Chris Burgard, he lives in California. He just happened to be walking down the street one day, came across Lewis, and asked Lewis did he want to say something and put it on film. Lewis said yes, and he had an opinion on some things that really sort of shocked Chris, and he said, why don’t we see what’s on his mind. Even though he is a homeless person doesn’t mean he is clueless… I have one sad thing to say about Lewis. Lewis just passed away last week, unexpectedly. So we only have about three episodes with Lewis, but we were going to continue. Unfortunately, Chris went back to shoot another episode and talked to some of his friends and found that he unfortunately passed away of a heart attack.

There were two major problems with Cain’s version of the story, and both have to do with Brown’s passing. The New York Times‘s Adam Nagourney profiled Brown in May 2011, and wrote his obituary in September of that year. Nagourney confirms the date of Brown’s passing to Mediaite and adds that he had been speaking to Brown “for three or four months” before the first profile, putting the date of Brown’s initial media discovery at January or February of 2011. During the entirety of that year, Herman Cain was busy running for president, and it is hard to imagine he had begun work on Cain TV.

Cain’s spokesperson confirmed the disparate dates resulted from Cain “misspeaking,” as he only found out that Brown was dead last week. Had Burgard worked on this project during the months Cain was running for president specifically for Cain TV, Cain’s claim that he just happened upon a New York Times profiled man– one who had a formidable but fleeting basketball record at that– would be dubious at best.

But the Cain TV iteration isn’t the first to exist. In fact, the entire series is recycled from none other than Samuel “Joe the Plumber” Wurzelbacher‘s old show, Whaddya Know, Joe?

Whaddya Know, Joe? was a program for RightNetwork, a Kelsey Grammer-led new media venture much like Cain TV, produced by Cain’s same producer– Chris Burgard. In this review from Big Hollywood‘s Ezra Dulis, Brown’s “Street Smarts” is mentioned as a segment on the show, and described exactly as it appears on Cain TV: “‘Street Smarts’ with Lewis Brown, a man who either is homeless or just looks it, shares his thoughts, promising, ‘My mouth don’t write checks my ass can’t cash.'”

Watching the trailer for Wurzelbacher’s show, it is clear that Brown’s is not the only segment to find its way to Cain. Much of the work there has made its way into the new venture, and that many of the same people are involved– for example, Cain TV host and Romy Michelle’s High School Reunion star Kivi Rogers makes an appearance on the RightNetwork YouTube site, as well. See if you can spot Lewis Brown in the trailer below:

Had these videos premiered between May and September 2011, one could argue Burgard did not happen upon Brown on the street at all– he read the New York Times articles and went to make of a smart but homeless man a conservative star. But this is impossible, because the above video using footage Cain is now broadcasting on his site was uploaded to YouTube on February 2011– long before Nagourney’s piece, but right about during the time he began his research for it. At press time, Cain TV has not replied with specifics on the dates these were film, hence the estimation. Those estimates show it is entirely possible Brown was conducting both interviews simultaneously for very, very different projects.

This is simply incredible.

Brown, Nagourney narrates, was beloved in his community, to the point that those who previously shooed him from the sidewalk eventually took him in to listen to his stories, and he did perform odd jobs from time to time. It would not be hard to imagine Brown as a minor celebrity in his neighborhood. But the jump from that to national stardom, not to mention posthumous national stardom — to the point that even the man who discovered him and put him in the Times seemed surprised to find him in the news again — is about as rare as it gets in media. Lightning doesn’t often strike twice; with Brown, he’s on his third fifteen minute ride.

And that ride significantly differs from the other two, even if the video on Wurzelbacher’s show is exactly the same as what appears on Cain TV. In the Times piece, Brown is a talented, charismatic fellow who brightens his block with his stories, yet who tragically seems to have given up on himself. The transformation from this to Joe the Plumber part-time associate — and from that to conservative show host — is quite the climb. And if these are the apolitical mysteries and labyrinthine plot twists Cain TV has prepared for us find as we try to figure out what exactly he is up to, rest assured he will have the media riveted on this bizarre and slightly unsettling programming for some time.