How Accurately Did Walter Cronkite Predict The Future?

How Accurately Did Walter Cronkite Predict The Future? 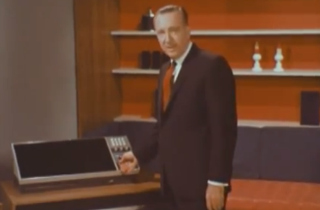 Kind of accurately… if you ask me.

Uproxx points us to a video of legendary broadcaster Walter Cronkite previewing the 21st century office back in 1967, and he seems to have predicted the future somewhat well.

“This is where a man might spend most of his time in the home of the 21st century,” Cronkite began the video. Negative one point here for not realizing women would (and were already beginning to) break free from the mid-century prison of household chores. In the 21st century, Walter, women too can have home offices full of neat computer doohickeys.

Pointing to a set of gizmos and gadgets, Cronkite explained, “This equipment here will allow him to carry on normal business activities without ever going to an office away from home.” TELECOMMUTING. WOW. Spot on.

Cronkite then explores a printer-like doodad that allows people to print the news “for permanent reference,” via satellite link-up. Not sure how to score this one — he gets the home printer correctly, but the whole “every computer will be linked to a satellite” thing isn’t entirely correct. But still… pretty close. We have wi-fi now, which is almost like what he described here.

Up next was a panel used to monitor the weather, stocks, and the news. Sounds about right.

He also displayed a “futuristic phone,” coupled with yet another computer screen, allowing you to see the person with whom you are speaking. In other words, Cronkite predicted Skype.

The final screen on the desk, Cronkite explained, would be used as a closed-circuit communications system, allowing you to monitor any room of the house. The sample image, of course, shows a mother and a little girl changing the sheets on a bed. Is that one accurate? Perhaps not entirely in technical terms (some people do have in-home surveillance, but it’s not an ubiquitous product), but most certainly in terms of the computer being used for… creepy… things. Then yes, that’s entirely accurate.

“With equipment like this in the home of the future, we may not have to go to work,” he concluded. “The work will come to us.”