How Do 6 of the Top 10 Highest-Paid CEOs Work in Media? 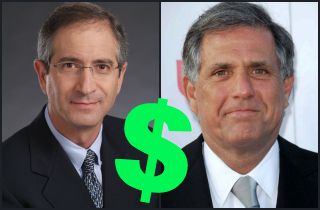 The conventional wisdom around highest paying jobs invariably says lawyers, doctors, Wall Streeters, and professional athletes earn the big bucks. But how about working in media? Is that a wise career choice if stability and salary are two big priorities?

Well, that depends on who you’re talking to.

If, for example, you’re having a conversation with six certain CEOs of media companies, they’ll likely say they have absolutely no regrets around their chosen profession. But when engaging in the same discussion with those at the entry level or even mid-level, the perspective could be much, much different.

To that end, the Associated Press reports today that a majority of the highest paid CEOs in the country just happen to work for media companies. No surprise there…America is a more content-driven, more entertainment/infotainment-driven culture than ever before. Media companies via mergers and acquisitions have never been larger, making the paychecks for those who run them larger as well. And media has never been more prevalent, as almost anyone with a cell phone now has the ability to watch anything, anywhere, anytime. In the words of the great King Louis (OK, Mel Brooks)…”It’s good to be the King.”

Included on the top-paid CEO list are the following names:

#5 – Philippe Dauman (Viacom, with includes Comedy Central), $37.2 million. Much more feasible number for the aforementioned associated producer to work with, as he/she achieves that amount by the year 3076.

#7 – Robert Iger (Disney, which includes ABC/ESPN), $34.2 million. 2013 was good for Iger…because not only did he get about 19 percent of my annual earnings after the family trip to Disney, but his pay increased 46 percent from the year before (Moonves and Dumann only saw a nine and 11 percent uptick, respectively).

#9 – Jeffrey Bewkes (Time Warner, which includes CNN, HLN, TNT, TBS): $32.5 million. Bewkes is now going through his second divorce after 20 years of second marriage. Good news for Jeff is he’s now a single guy with a few bucks to throw around during upcoming Tinder dates. Bad news is that $32.5 million will likely be reduced by a considerable amount depending on what kind of prenup (if any) is involved.

#10 – Brian Roberts (Comcast, which includes NBC and MSNBC), $31.4 milion: Talk about being born under a good sign. Did you know Roberts inherited the company from his father, who founded the company with 1200 whole subscribers in northern Mississippi? Today, Comcast has nearly 22 million subscribers, and that’s without the 14+ million coming with its (not-yet-approved) merger with Time Warner Cable. Of the ten on this list, Roberts could end up being the most powerful sooner rather than later.

As mentioned earlier, just because these CEOs are being paid obscene amounts of money doesn’t mean it trickles down to those who work for them. Coming from experience, the media business (particularly in broadcast news in New York) is arguably the most competitive of any to jump into. Is it sexy, exciting and unpredictable? Does it beat a repetitive office job? Is each day completely different from the next? Yes. Yes. And yes.

But since it is so competitive, salaries get driven down as a result. You don’t like your paycheck? There are other ten guys or gals who will gladly take it. Leverage is a foreign concept. This not only applies to entry-level positions (such as Associate Producer, Production Assistant, Researcher, Writer, etc.), but midlevel positions as well (Line Producer, Segment Producer, Copy Editor, for example).

The hours can be brutal — day is night and night is day. Weekends are oftentimes called “Tuesday.” The stress while working a live broadcast is nothing short of insane. Proper diet and exercise largely goes out the window. Many who enter the business with big dreams and aspirations end up leaving for another job outside the industry quietly, dejectedly. Suddenly a 40-hour, 9-to-5 workday at a tedious office job doesn’t, you know…sound all that bad.

So while the top is living large, those looking to climb the ladder aren’t living much at all. Think of it like making the transition from college athletics to the pros: Only a fraction of those who enter media end up like a Moonves or Bewkes, just like only a fraction become a Manning or Brady. But in almost every instance, regardless of where one is on the ladder…CEO, PA, whatever…all share the commonality of hard work and dedication to the craft. And many will tell you that while the money ain’t great and the hours suck, they wouldn’t trade it for anything. For better or worse, the rush gets in your blood.

Want to work in media?

You could eventually earn more money than could possibly be spent. Earn even more than the CEOs of Goldman Sachs, American Express, or Ford.

But like playing the lottery or making the Seahawks roster, the chances of climbing to the very top are the very definition of slim-to-none.

In other words, when considering a career in media, be sure to come equipped with more than Red Bull.