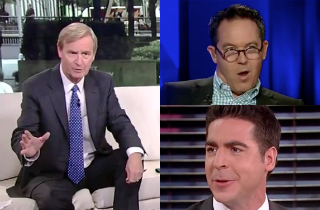 A little over twenty-four hours past the Supreme Court’s ruling in the so-called Hobby Lobby case and Fox has cobbled together a wacky talking point about it: no fewer than four shows on Monday night and Tuesday voiced some variation of “now the left’s accusing the Supreme Court and Hobby Lobby of imposing Sharia Law!!!1!!1!!one!!”

How’d Sharia Law get mixed up in this? The likely culprit is a tweet yesterday afternoon from comedian John Fugelsang, which rode a Scalia/Sharia rhyme to the end of the line:

The Supreme Court #HobbyLobby ruling proves once again that Scalia Law is a lot like Sharia Law.

Call this a case study in overstating one’s point.

Yesterday’s Hobby Lobby ruling provoked overreaction from both sides of the aisle — here are Mediaite’s roundups of the left’s and the right’s histrionics. But with Fox wanting to crow over the decision, the left’s reaction was necessarily going to get more play. So over the course of eighteen hours Fugelsang’s tweet was inflated into “some are comparing the ruling to Sharia Law”; it then got rolled up with Jessica Valenti’s fuck-in tweet (the problem with which frankly escapes me) in a general complaint about the ferocity of liberals’ reaction on Twitter.

Soon it was bleeding into high-profile Democratic figures. “I do not believe that the imposition of Sharia Law is the result of the Hobby Lobby ruling as [Justice Ruth Bader Ginsburg] implies,” Bill O’Reilly told Don Imus Tuesday morning, though Ginsburg’s dissent focused on the conservative jurists’ misreading of the Religion Freedom Restoration Act. Then it was Hillary Clinton’s turn. “She’s acting like Hobby Lobby all of a sudden is telling these women that work for them to wear a burka,” O’Reilly assistant Jesse Waters said on Outnumbered, which he squeezed out of Clinton’s comments on a potential “slippery slope.”

Fox & Friends’ Steve Doocy didn’t even need to cite a source. “It’s a win for religious freedom, and yet the political left would have thought they took that out and replaced it with Sharia Law,” he said. “They were comparing a narrow ruling to Sharia Law,” Greg Gutfeld last night on The Five. The absent antecedent was the point: “they” is as many liberals and feminists as you want.

The Sharia Law references are goofy, but they serve two purposes. First, conservative state legislatures are usually the ones making headlines over Sharia Law through their attempts to ban it; this allows Fox to neutralize that particular embarrassment. More to the point, it licenses Fox hosts to intimate that the left got the case wrong, that their misrepresentation of the ruling’s scope was a proxy for their misunderstanding of its substance. The right’s multiple whoppers about the case — the idea that your employer “buys” your birth control or that female employees are lusting after employer-subsidized sex — are thus elided.

Moreover, by using the Sharia Law freakout as a foil, Fox painted the ruling as a narrow and circumscribed one (everything’s narrow when compared to Sharia). While that’s certainly the way Justice Samuel Alito wrote the decision, there’s plenty of worthy discussion to be had over how narrow it will be in practice. There are also persuasive arguments that the jurisprudence reeks far more of conservative social control than it does constitutional respect for religious practice.

But that nuance will have to wait. All Fox News hosts heard yesterday was “Sharia Law.” And for the time being, that’s all their viewers will hear as well.

Watch a montage of the clips below, via Fox News: