How O.J. Chase and Trial Coverage Helped Make Cable News What It Is Today 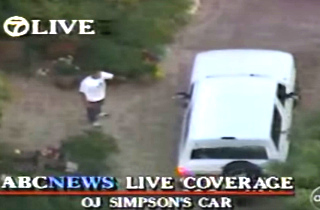 Very few news moments truly qualify for the, “Did you know where you were when…” such-and-such happened pantheon. For those under 50, the only two real contenders (since JFK’s assassination is off the table) for most would be 9/11 (second plane hitting the WTC South Tower confirming we were under attack) and the O.J. Simpson car chase, which will mark its 20th anniversary on Tuesday.

So where was I? Unlike most people who watched the slow chase unfold on national television from the beginning, I was in my old Jeep Wrangler embarking on a three-hour (thanks to heavy traffic) jaunt to the Jersey Shore (Long Beach Island). Talk or news radio wasn’t my thing at the time, so instead I filled the hours the best way I knew how: By listening to a bunch of mixed cassette tapes (song compilations carefully selected and made at home). So while the world was captivated in seeing an American icon being pursued by what looked like hundreds of police cars on TV, I missed the first two hours of the OJ Chase while stopping and starting on the Garden State Parkway.

And that’s how much the world had changed: In 1994, there really were no cell phones, absolutely no texting, no mobile Internet, and therefore no Twitter or Facebook. Today you would hear about the chase within seconds. Back then, you could miss the whole damn thing if you weren’t in front of a TV and singing along to Springsteen, Journey (got a problem with that?) and Pearl Jam instead.

When I finally got to the beach house (a share rental for the summer, which is common around these parts), my friends were watching a split screen of the Knicks-Rockets NBA Finals Game 5 in a small corner box and the OJ chase occupying the rest of the 21-inch SD screen (NBC was obligated to cover the game, so they presented both events, which was surreal). When I asked why there was a car chase on television in addition to the game, they looked at me as if Al Cowlings himself had just walked into the house.

“What? You don’t know what’s going on?” was the question that came in unison. So upon explaining that I really, really didn’t have a clue, I can’t say (at that moment) I had heard more shocking news in my life (outside of the Space Shuttle blowing up in ’86 and watching my sobbing English teacher break the news after another teacher rushed into the room and whispered something in her ear).

Back to 1994, upon hearing one of OJ’s lawyers (Robert Shapiro) read what was an apparent suicide note–as much as we all didn’t want to believe it–the note combined with the chase made it clear Simpson had done it. Of course, it sounds like a “Well, duh!” conclusion now, but for those born after 1980 reading this, think of it this way: Tomorrow you will hear that Shaq is accused of killing his ex-wife and a male friend. That would be very hard to believe, right? Nice, mild-mannered guy…one of the best the game has seen at his position, a successful career in movies and on TV as a analyst post-NBA. That was OJ’s resume, too, except replace NBA with NFL.

That said, it seemed to only be a matter of if rather than when in terms of Simpson taking his own life when the low-speed pursuit finally concluded. What we didn’t realize at the time was we were witnessing the birth of reality TV happening right before our eyes, along with 90 million others (a huge number I still always felt to be a much lower–it’s less than the Super Bowl viewership average–than it could have been. Put the OJ Chase on in 2014, and Twitter and texting alone to spread the word would bump that number by 50 percent. Guaranteed.

So how did the chase change broadcast journalism? Simple. It marked the day when the line between hard news and sensationalism was blurred forever. For the first time ever, the New York Times cited the National Enquirer as a legitimate source (which must have been horrifying for the Grey Lady’s old guard). Serious news programs like Nightline resisted covering the trial as much as possible, limiting reports to just once a week because they saw it as more of an sensational Enquirer story than anything else. How much have things changed? Just think back to how the George Zimmerman trial was handled by the media just last year.

June 17, 1994 was also the day when wall-to-wall cable news coverage of something other than war was born. Remember, there was no Fox News and MSNBC at the time (both born in 1996), but OJ proved there was a healthy appetitive for more 24/7 cable news outlets outside of CNN- which was basically the only national game in town at the time. Court TV and CNBC also greatly benefited from the Simpson trial, but were/are more niche networks (legal/finance, respectively) than anything else.

Reality TV? We have OJ to thank for that.

Cable news proliferation? OJ’s ratings may created some incentive to expand the playing field as well.