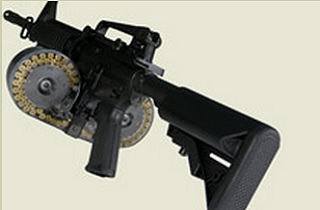 On the heels of some pretty disastrous media missteps in reporting on the Boston Marathon bombing as it unfolded, news organizations are on a short leash when it comes to the Washington Navy Yard mass shooting, which featured many significant changes in the facts on the ground. One of those facts, shooter Aaron Alexis‘ no-longer-alleged use of an AR-15 semiautomatic rifle in the killings, is being trumpeted as a twin-killing of the media’s credibility, and of their “gun-grabbing” narrative.

For nearly 24 hours after the mass shooting at the Washington Navy Yard began, news organizations were reporting that the shooter likely used an AR-15 and two handguns, reporting that was based on multiple reputable law enforcement sources. All of that changed at around 9:30 this morning, when an FBI spokesperson confirmed that it was a shotgun and two pistols that were recovered from the scene, and not an AR-15. At a press conference Tuesday afternoon, FBI Washington field assistant director Valerie Parlave further added that “We do not have any information, at this time, that he had an AR-15 in his possession.”

It is with a certain reflexive glee that critics tore into the media for reporting this information at all, a reflex that, in this case, is misguided. In that same press conference, Assistant Director Parlave also said this: “There’s been a lot of information circulating in the media over the past day. We caution against obtaining information from unofficial sources, and we ask that all inquiries be directed to the FBI.”

While such a practice would certainly eliminate reporting like the erroneous AR-15 information, it would also eliminate all reporting as we know it. A stenographer could as easily record the information that the FBI felt confident in disseminating, and reporters could all go work at Walmart. The information turned out to be wrong, but the question ought to be whether or not these reporters followed solid journalistic procedures. It appears that they did.

That, plus Parlave’s slight disclaimer that “we dno not have any information, at this time,” are likely hedges against the possibility, however remote, that another weapon is later recovered, and Johns’ source doesn’t inspire confidence by telling him there was a shotgun, but “there was no long gun”; a shotgun is a long gun.

The point, though, is that if Wednesday miraculously sees the recovery of an AR-15, what does that do to all of this gleeful bashing of the media? Will it make their initial reporting any more or less responsible? The sources were either solid and plentiful, or they weren’t. It looks like they were, and when those sources turned out to be wrong, that information was also reported, widely and transparently.

Marginally more valid is the criticism that some in the opinion media rushed to peg their gun control arguments to the use of the AR-15. CNN’s Piers Morgan, Media Matters‘ Eric Boehlert, and The New York Daily News’ Mike Lupica are among those singled out for fixing their Navy Yard shooting critiques around the weapon. Boehlert tweeted “Bottom line: another AR-15 mass shooting,” which left him without a bottom line. Lupica used it as the fulcrum of a column entitled “AR-15 is the rifle for the ‘sport’ of hunting humans,” which now bears the following editor’s note:

The FBI’s assistant director in charge of the Washington Field Office said Tuesday that gunman Aaron Alexis acted alone in the Navy Yard shooting that killed 12 people and added “we do not have any information” that an AR-15 was used. Mike Lupica’s column was written Monday when The Daily News and The Associated Press among many others reported, using reputable law enforcement sources, that the shooter Alexis had used three weapons including an AR-15.

Lupica’s column, though, doesn’t suffer or improve much with the addition or subtraction of Aaron Alexis, whom CNN’s law enforcement sources now say rented an AR-15, but returned it prior to his rampage. Lupica’s column isn’t so much an argument for or against regulation of assault weapons as it is a tone poem about a gun that is well-suited to mass shootings. If the FBI turns up an AR-15 tomorrow, Lupica’s column doesn’t become any more compelling, and the current absence of an AR-15 among the cache does little to refute it’s overall theme. Lupica’s right, there will be another mass shooting with an AR-15.

What Lupica, et al, did accomplish was to give pro-gun conservatives something to crow about, with very little to show for it. The window between tragedy and policy conversation has become thankfully short, drawing conclusions that are overly narrow, in poor taste, or just plain not compelling can do more harm than good. With so many facts changing, and many more certain to emerge, it is silly to fix your entire argument to a fact that may change, and that isn’t all that compelling to begin with.

There are many more compelling arguments in favor of an assault weapons ban than their use in mass shootings, not the least of which is the inclusion of a limit on magazine size. If the current facts hold, then it seems fortunate that the Navy Yard shooter didn’t carry out his attack using an AR-15 with a 100-round magazine, like Aurora shooter James Holmes, or a handgun with a 33-round magazine, like Tucson shooter Jared Loughner. The fact that Aaron Alexis appears to have passed background checks would illustrate an urgent need to toughen those up.

But by the same token, how does the fact that an AR-15 wasn’t apparently used in this particular shooting turn this whole episode into a win for the AR-15? As weak as I think Lupica’s column is, the reaction by conservatives seems to buttress the underlying premise, not weaken it. If you found out that Hannibal Lecter actually hadn’t eaten this one dude, would that make that whole “cannibalism narrative” crumble? The fact is, AR-15’s get used by lots of mass shooters, and more than a third of the weapons used in mass shootings since 1982 would be outlawed under an assault weapons ban. If I were trying to defend the AR-15, I wouldn’t say “See? It wasn’t used this one time,” I’d say “It’s a popular gun. Of course, it turns up in some of these shootings.”