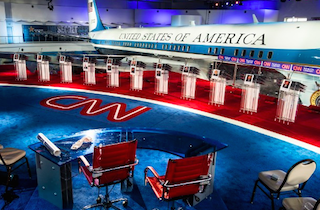 CNN is hosting the second Republican presidential debate of the 2016 election Wednesday night from the Ronald Reagan Library in Simi Valley, California. After Fox News smashed all previous debate records with 24 million viewers tuning in last month, expectations are high for CNN and moderator Jake Tapper.

And unlike Fox, CNN is allowing viewers to watch the show for free, without logging in, via CNN.com’s home page and the network’s mobile apps, which you can download here.

While these streaming platforms typically require a cable subscription authentication, CNN has decided to use the debate as a way to draw new users into its digital platforms.

“We are offering this as a preview,” Andrew Morse, head of US editorial operations and worldwide digital at CNN, told Mashable. “To me, there’s a longer play here, which is that we want our audiences to know this is a service they can get from CNN going forward. We want to build that user behavior.”

The first, so-called “undercard” debate will air at 6 p.m. ET with four candidates — Bobby Jindal, Rick Santorum, Lindsey Graham and George Pataki — sharing the same stage that the 11 top-tier candidates will appear on two hours later at 8 p.m. ET. Carly Fiorina is the only candidate set to appear on CNN’s main debate stage who did not make the cut last night on Fox.

Below is the diagram of where each candidate will stand, with Donald Trump dead center and Jeb Bush and Ben Carson on either side:

The 2 stages are set for the Sept. 16 #CNNDebate. Who makes the main stage? http://t.co/75Pm4p32nP pic.twitter.com/fuSq6ZiLkW

Along with Tapper, CNN’s Dana Bash and radio host Hugh Hewitt are expected to ask the candidates questions, and encourage robust interaction between them.

Here is time-lapse footage of CNN building the debate stage to get you excited: