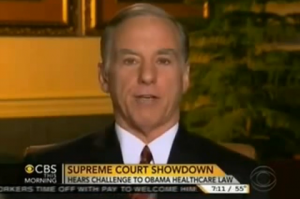 On Monday, former DNC chairman Howard Dean appeared on CBS This Morning to talk about the Supreme Court’s impending health care decision. While he said ObamaCare has several good components, Dean predicted that the court will rule the individual mandate unconstitutional.

Dean told host Charlie Rose that he thinks Justice Anthony Kennedy’s swing vote will side with the conservative justices when it comes to the individual mandate issue:

“I do believe that it’s likely the individual mandate will be declared unconstitutional. Kennedy will probably side with the four right-wing justices. But I’d be very surprised if they — I think Kennedy will switch sides and it will be 5-4 in favor of severing that finding from the rest of the bill. The question is going to be, is this individual mandate question, can that be considered separately from the rest of the bill? And I think it will be.”

Conceding “I’m not a lawyer,” Dean also said the health care legislation can remain in place without the mandate. “It’s definitely not necessary for the bill to succeed,” he said. Dean continued: “It was mainly put in by academics who built the program for Gov. Romney in Massachusetts, they had did it there, and for insurance companies who will benefit from extra customers.”

But the truth, he said, “is that the number of so-called free riders — people who will refuse to get insurance until they get sick — is going to be very, very small.”

Dean contended the actual benefit of the individual mandate is “relatively small.” He further observed: “Everyone is a libertarian in America, whether Democratic, Republican or independent. They don’t like to be told what to do by government.”