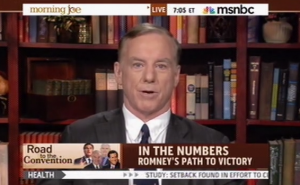 Liberal distaste for former Sen. Rick Santorum has blinded many of them to his fundamental appeal as a presidential candidate, but former Vermont Gov. Howard Dean gets it. In assessing the GOP primary race on Thursday morning’s Morning Joe, he made the observation that, while Mitt Romney has long been seen as the most formidable challenger to President Obama‘s reelection, “I almost fear Santorum more, because he actually can connect with people. I think he would be tough for us, much tougher than I would have thought, given his positions.”

Host Mika Brzezinski asked the former DNC Chairman what he would do if he ran the Republican Party. “Being in charge of this party’s a disaster,” Dean replied. “They screwed it up a long time ago when they [were] allowed to have 20 televised debates, each one more far right-wing than the next. They completely alienated the independents in this country.”

“I don’t know how you could rescue this situation,” he added. “I do think Romney will eventually be the nominee.”

Echoing the sentiments of Obama campaign senior adviser David Axelrod, Dean predicted a long, damaging promary process. “I think he’s so badly damaged by this process already. How do you convince women that they should vote for a Republican after all this?”

Morning Joe regular Donnie Deutsch also made an interesting comparison among the GOP hopefuls. “This network has a slogan, Lean Forward,” he said. “What’s interesting is when Santorum comes on, forget that I can’t stand everything he says, you kind of Lean Forward. When Romney comes on, you lean back, viserally. And Gingrich, can’t stand him, but you lean forward. This is the lean back candidate.”

“This is fascinating,” Dean interjected. “People have asked me, well, do you fear Romney? I’ve always feared Romney the most of any candidate since 2008. I almost fear Santorum more because he actually can connect people. I think he would be tough for us, much tougher than I would have thought given his positions.”

The real shame for Santorum is that, despite being massively outspent by Romney, he could be in much better shape if not for his bizarre stream of unforced errors. People already knew of his hard-right social positions when he had huge leads in Michigan and Ohio, but who would have guessed he would come out and attack going to college and JFK? And after being the unsung power hitter at every debate thus far, who would have predicted he’d fall on his face in the last one?

What many liberals don’t understand about Santorum is that he has truckloads of authenticity and relatability. It’s hard for some of us to wrap our heads around the fact that the guy with the gross Google thing, the “man-on-dog” guy, is a personally engaging candidate with a biography that has broad appeal. The political press on all sides are also afraid to point out, or ignorant of the fact, that there are a lot of stupid, superficial people in this country, the kind of people who cast their votes based on the old “beer test,” the kind of people who can’t see the clear difference between the two parties’ policies. They’re the ones who decide elections, and Dean is right, the Democrats might be dodging a bullet in Santorum.