Howard Dean Stands Up For Herman Cain’s Handling Of Libya Question: ‘At The End Of The Day, He Got The Issue’ 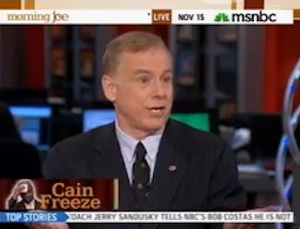 While the rest of the Morning Joe crew relentlessly lambasted Herman Cain for his befuddled response to the Milwaukee Journal Sentinel‘s questions on Libya, Howard Dean came to the beleaguered Republican candidate’s rescue. “I don’t think that was that awful. Look, I don’t think –” Dean argued, before being drowned out by the other commentators.

“You want Herman Cain to be the nominee? Come on! ” host Joe Scarborough boomed.

“At the end of the day, he got the issue, which was who was in the opposition in Libya?” Dean observed. “That’s reasonable.”

“What are you doing, Howard Dean?” Scarborough snarked.

“Look, what Rick Perry did was a lot scarier than what Herman Cain just did,” Dean continued.

“I’m not defending him!” Dean said. “I’m just saying i didn’t think it was that bad…”

“I kind of love Herman Cain too because he is enormously entertaining and what a great nominee he would be for the Republican Party,” columnist Eugene Robinson said. “However, that was appalling!”

“He got the issue right at the end!” Dean argued.

“I’m going to throw something at you,” Brzezinski jokingly said.

“You can nail Herman Cain on a number of issues, I don’t think this is a good one,” Dean explained.

It’s not hard to see why Dean would be naturally inclined to stick up for Cain. Both were anti-establishment, outsider candidates, and Dean’s former campaign manager Joe Trippi made the comparison between the former Vermont Governor and the former pizza executive. “This thing is the same as 2004,” Trippi said in an interview with The Daily Caller. “You’ve got the Democratic establishment in 2004 and you’ve got the grassroots of the party wanting something different than what the establishment’s feeding them.” Here, it appears Dean is just trying to be fair amid a barrage of criticism.