Howard Dean: Tea Party ‘Aren’t Playing With A Full Deck’ And ‘Could Go Off The Rails’

Howard Dean: Tea Party 'Aren't Playing With A Full Deck' That 'Could Go Off The Rails'
Twitter share button 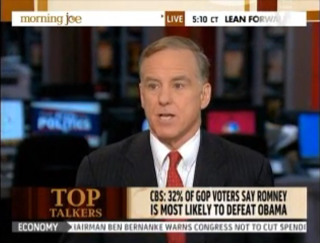 As Howard Dean sees it, anyone gunning for a win in the 2012 presidential election will face the same problem: the Tea Party. “They are not playing with a full deck,” he said earlier today on Morning Joe, arguing that they make for an unpredictable voter base. “I’ve never seen this on the Republican side,” he continued. “They are usually much more disciplined.”

Mitt Romney, a likely but not loved candidate for Republican nominee, will most of all have to grapple with the Tea Party’s unreliable “Republican-ness.” Citing his “not so good” poll numbers, he argues that, despite being the best known candidate in the race and most likely to win the nomination, Romney has yet to earn considerable Republican and Democratic confidence. He calls this Romney’s “big base problem:”

If he gets the nomination, and I think the odds now are very heavily that he will, he’s got a big base problem. And usually that’s not a problem. Republicans are very disciplined, they’ll pull behind him. Actually, even the Democrats pull in behind after a fight like this. This year you’ve got the Tea Party. They are not playing with a full deck. I mean, they could go off the rails here. This is going to be really interesting. They might sit home, or vote for somebody else, or find a Libertarian, or Ron Paul might do something. Who knows.

Michael Steele, joining Dean this morning, argues that President Obama‘s economy problem (water to his fire, as he puts it) far outweighs Romney’s base problem, and that “with the base, and in terms of his positions, people are coming to settle.” Steele and Dean, however, seem to be agreeing to some extent: earlier in the show, Steele suggested that, “This is beyond who the nominee should be, this is also a lot about where the party is going to go.” Dean’s characterizations of an “off the rails” Tea Party, aside, both men seem to be acknowledging that the Tea Party will hold sway in the coming election and will need to be accounted for by prospective nominees.