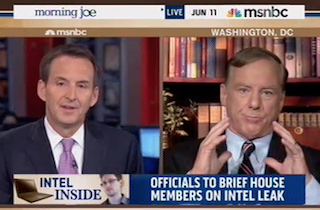 Looking at headlines, one would think the NSA is reading all of our emails and listening to all of our conversations — but that isn’t the case. Or so Mika Brzezinski and Eugene Robinson sought to convey on Tuesday’s Morning Joe. Meanwhile, Howard Dean cautioned against assuming the government is “always benign.”

Robinson noted that in terms of phone calls, the government is collecting metadata, and the internet surveillance doesn’t apply to us because it’s happening overseas. But from there, the panel moved on to Edward Snowden, the leaker who made this news cycle possible. Tim Pawlenty joined the discussion, asserting that Snowden isn’t a whistleblower because he didn’t reveal anything illegal.

“He’s not a whistleblower, he’s a traitor and should be prosecuted as such,” he said. “Number two: What the heck was a 29-year-old high school dropout doing with this kind of access to the highest, most sensitive information the country has?”

These programs are bipartisan and included court oversight and congressional notification, Pawlenty added — and all the government sees are patterns in the metadata. And anyway, he added, we’re all being watched via shopping and social networks anyway. That prompted BBC’s Katty Kay to question whether Pawlenty felt this was a necessary conversation at all.

“Because if you think that this is a valuable conversation, the only way we can have this conversation is because Snowden released some of this information,” she noted. Pawlenty simply repeated that he’s not a whistleblower and there’s little doubt “a program like this existed in some manner.” Kay wasn’t convinced.

“You cannot consider the government as always benign,” Dean chimed in. “From a Democratic point of view, put yourself, as a Democrat, in the position of George Bush running all this stuff and Dick Cheney — that would make me nervous. The best disinfectant is publicly shining the spotlight on this program.”