Howard Fineman On Golf-Gate: Press Deserves To Be Shut Out, Not ‘Worthy Of The Access We’re Not Getting’
video

Howard Fineman On Golf-Gate: Press Deserves To Be Shut Out, Not ‘Worthy Of The Access We’re Not Getting’ 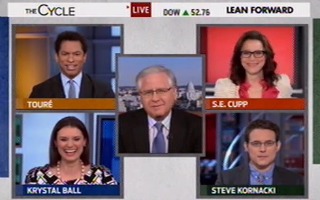 The Huffington Post political editor Howard Fineman slammed the entire journalistic establishment during an interview with MSNBC’s The Cycle hosts on Tuesday. Fineman was asked about the press corps’ frustration with the White House after they were allowed no access to President Barack Obama during his trip to Florida to play golf with Tiger Woods. Fineman said that reporters should take a look in the mirror before complaining about a lack of access to the White House.

Touré equated the press’ frustrations with the White House to an argument he recently had with his wife when he went out after work but neglected to inform her of his plans.

“They weren’t mad that the president was on the links with the greatest golfer of all time, they were mad they weren’t told about it,” Touré declared. “The transparency and access they think they deserve is not being delivered.”

“This is part of a classic White House versus press corps battle, right?” Touré asked Fineman.

“This is a typical Washington battle where the most trivial thing generates the most discussion while ignoring the more serious story behind and above it that nobody bothers to look at – which is not only whether the president is doing his job, but whether the press is doing its job,” Fineman said.

“I just wrote a post on The Huffington Post which — the kicker of it was, let’s make sure that the reporters, namely us, make sure we’re worthy of the access we’re not getting,” Fineman said. “And I don’t think we are.”