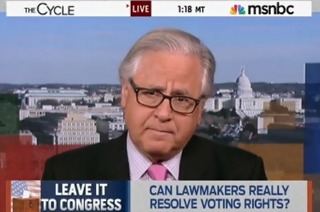 The Huffington Post Editorial Director Howard Fineman delivered a grim prognosis relating to the sustainability of the Voting Rights Act of 1965 after the Supreme Court struck from the law provisions relating to the regions of the United States which must submit reapportionment proposals to the Justice Department for preclearance. “Preclearance is dead,” Fineman said, “unless Congress acts soon.”

NBC News reporter Luke Russert began by asking Fineman how today’s ruling on the VRA impacts Democratic plans to expand into traditionally Republican states in the Deep South and Southwest.

“I think a lot is going to depend on how we come to look at discrimination and voting now,” Fineman began. “I think the way to approach this is for the Democrats to say, ‘Look, let’s move forward here.’”

RELATED: If GOP Approaches New Voting Rights Act Like They Did Immigration Reform, The Party Is Doomed

“This is an opportunity to renew for the next century the spirit of the Civil Rights Acts of the ‘60s,” Fineman continued. “At the very least, what they’re going to have to do, is raise a whole lot of money for a whole lot of lawsuits all over the country.”

“I think preclearance is dead unless Congress acts soon,” he concluded. “And that’s going to mean you’re going to have to have vigilant people filing lawsuits all over the country, seeking injunctions after the fact trying to make sure the voting procedures are just.”