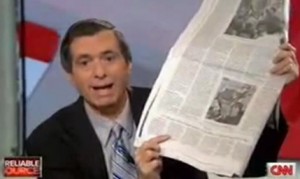 On Sunday morning’s Reliable Sources, host Howard Kurtz took the media to task for having roundly criticized President Obama‘s decision to get involved in Libya, but failing to give the President credit for Muammar Gaddafi‘s killing at anywhere near the same volume. “The media wallowed for months in criticism of the Libya policy,” Kurtz said,  “Why don’t they stop now, give some credit to the President when a brutal regime is toppled, and the policy is successful?”

Kurtz began his segment in a novel way, playing clips of Libya criticism from Sean Hannity, who said that President Obama “no intention of enforcing a threat that Gaddafi will be removed,” and Keith Olbermann, who criticized what he saw as the President’s mixed messages on whether the object of the mission was to remove Gaddafi.

He then showed a New York Times headline that proclaimed “some vindication” for the President’s Libya policy, way at the bottom of the page. Terence Smith said he thought the President deserved credit, and that initial criticism of the policy “reflected the public and wider view beyond the media.”

Kurtz pushed back, saying, “Seems to me to have been a one day story. The New Yorker reported an unnamed Obama aide saying the president was leading from behind, maybe so, would the press prefer he land on an aircraft carrier and brag?”

The Blaze editor Amy Holmes channeled Keith Olbermann’s criticism, to some degree, saying that the President didn’t deserve credit for Gaddafi’s killing because, despite having called for the dictator’s ouster, the stated objective of the mission was not to remove Gaddafi, but to protect civilians.

While Olbermann’s critique was likely out of naivete, and Holmes’ out of partisan convenience, they both missed exactly the same point: it ignores the diplomatic subtexts involved. The President and his advisers have several key audiences to deliver messages to (including the disparate international community, the American people, the Libyan rebels, and of course, Gaddafi), and threading that kind of needle is bound to sound confusing. The fact is, though, if your stated objective is to dispose of some flour, eggs, and buttermilk, you still get credit for baking some biscuits.

Kurtz pointedly asked, “Why is that unfair comparison?”

“This is not the metric that they set out,” Holmes said, fretting, “is it appropriate for the chief White House correspondent to do this sort of offhand foreign policy analysis?”

Holmes’ remark about Chuck Todd, and Smith’s defense that the media’s Libya criticism “reflected the public and wider view beyond the media,” are exactly what is wrong with current attitudes about journalism. There is this notion that figures in the ostensibly objective media (as opposed to openly opinionated figures like Olbermann and Hannity) ought to simply be reciters of facts, and of what everyone else is saying. This is an abdication of journalism’s most important function, the one that separates it from simple stenography.

Not only is it appropriate for Chuck Todd to do “offhand foreign policy analysis,” it is essential for him to do so. The media should not “reflect” public opinion, it should help to shape it, by deciding what news is important to report, contextualizing that news, and when possible, clarifying it. The current “some say/others say” vogue does nothing but muddy the waters.

If we are going to accept that there is a profession called journalism, then we need to accept that its practitioners have sufficient training, experience, and wisdom to do the job. They should be evaluated on the merits of how they do that job, and not be criticized for daring to do it.