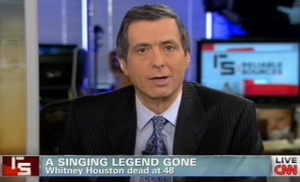 News of the tragic death of singing legend Whitney Houston has dominated the airwaves since it broke Saturday night, quite naturally, it would seem. On CNN’s Reliable Sources Sunday morning, however, host Howard Kurtz wasn’t so sure the coverage matched the import of the story, as he noted the intensity of the coverage, and asked panelists Eric Deggans of the Tampa Bay Times and former Mediaite editor Rachel Sklar “Is the Whitney Houston story worth that kind of coverage?”

“The coverage of Whitney Houston’s death exploded last night, especially on cable, wall to wall,” Kurtz observed. “From what I have seen on the air this morning, it is very much continuing at an intense pace.”

After introducing his panel, Kurtz asked, “Given the magnitude here; of how this is treated, at least on the airwaves, is the Whitney Houston story worth that kind of coverage?”

He later noted “she was a huge musical star, you know, more than a decade ago, two decades ago, and in the last decade she’s really been the star of a soap opera, the soap opera of the problems in her life.”

Deggans and Sklar each responded with what is probably obvious to everyone in the world except Howard Kurtz, that Whitney Houston was an incredibly influential, timeless artist whose troubled personal history, placed on uncomfortable display with the emergence of the microscope media, is dwarfed by her indelible musical legacy.

Continuing to display the sensitivity of a frostbitten masseuse, Kurtz tossed to a clip from an old Diane Sawyer interview by saying (emphasis mine) “On my point of the way in which she’s covered in the last ten years, you know, mostly for self-inflicted reasons, let’s look at a sitdown she had with Diane Sawyer. This was back in 2002.”

Earlier in the program, Kurtz also asked former CNN host Larry King, “What is it about her death, why is this such a big story, the coverage began practically wall to wall last night on cable news networks?”

Writing for a media reporting website, I understand the impulse to shoehorn everything into that lens, but sometimes, you have to be a little bit artful, and ideally, you should always make sense. Arguably worse than the insensitivity here is the quality of the analysis. The most cynical idea I can muster about the depth and breadth of the Whitney Houston coverage is that this news broke on a Saturday night; during that news dead zone, even I could probably get some posthumous screen time by live-tweeting “Ruh-roh! This is the big…GASP!”

What we have here, though, is not some social media novelty, but a legendary singer passing away at the tragically young age of 48, on Grammy weekend. It’s hard to imagine what the cable newsers would bump this story for.

From what I’ve seen, coverage of the singer’s death has not shied away from the personal struggles that defined the latter part of Whitney Houston’s career, but has also given proper weight to her influence and talent.

There’s an interesting, chilling sidenote to this story. I first learned of Whitney Houston’s death when via unconfirmed reports on Twitter. At the time, a quick Google search to confirm the news turned up an ABC News report that said Houston’s rep was denying the singer’s death. That moment of hope, though, was quickly dashed by a glance at the dateline of the report: Sept. 13, 2001, just days after the 9/11 terrorist attacks.