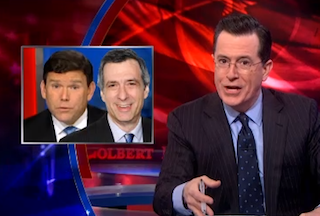 Aww… Stephen Colbert hurt Howard Kurtz’s feelings. And unlike some of his Fox News colleagues who take Colbert’s ribbing as point of pride, Kurtz is sticking up for himself. In fact, on Friday he published an “exclusive” third person column titled, “Howard Kurtz Takes on Stephen Colbert.”

You see, now that Kurtz is a full-fledged Fox News host, he’s an even easier target for Colbert’s mocking scorn. That is especially true after he put out entire report asking whether Hillary Clinton’s might just be too old to be president.

“It’s about time someone took on Stephen Colbert,” Kurtz begins his piece. “This guy—a fake anchor if ever there was one—has been maligning hard-working journalists for too long. Journalists like me.”

First of all, thank you Howard Kurtz for being brave enough to say what so many have suspected but none have been able to confirm: Stephen Colbert is a “fake anchor.” I’m just glad someone has finally told the world this Comedy Central star’s dirty, little secret.

Kurtz goes on to accuse Colbert of using “selective editing” to get some “cheap laughs” at his expense. He promised an on-air response on this week’s MediaBuzz, something that will clearly just give Colbert more fodder for next week, which couldn’t possibly be Kurtz’s intention… right?

Considering what Colbert has said about some other Fox News hosts in the past, Kurtz should probably be thanking him for going so easy on him. If he really wants to know what it’s like to feel Colbert’s wrath, he should talk to Fox’s Eric Bolling, of whom Colbert once said, “Every time I watch Eric Bolling, I want to kill myself.”

“Now Colbert was perfectly nice to me when I was once on his show, but it’s now clear he was just trying to disarm me for future attacks,” Kurtz writes. “Well, two can play this game, buddy. If I really want to get down in the dirt with him, I might even try to be funny.”

Watch the Colbert segment below, via Comedy Central:

And, for comparison’s sake, here is Kurtz’s full report on this past Tuesday’s Special Report, via Fox News: