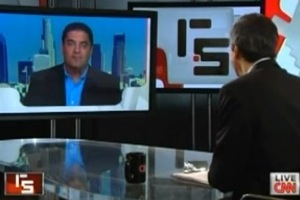 Former MSNBC host Cenk Uygur appeared on CNN’s Reliable Sources to further explain his separation from the network and to speculate why he is likely being replaced by Al Sharpton. However, Howard Kurtz wasn’t really convinced by Uygur’s theories, and instead was curious why he gets “ticked off” by an employer giving him notes on his style?

Uygur stated the conversation that soured his relationship with MSNBC was when he was told “people in Washington have a concern with my tone.” While MSNBC executives allege such “people” were merely MSNBC bookers and producers, Uygur was “incredulous” of that claim, and instead interpreted “people” to mean members of government. Uygur argued, “our media is obsessed with access, it’s not just MSNBC” and that journalists should be challenging politicians and not worried about trying to get them to appear as guests. Kurtz took exception to such criticism:

“I see people who I agree with and disagree with on Fox, on MSNBC, on CNN, challenging the government every night. So it does kind of come back to your tone, I’ve watched you, you’re a passionate guy. You can be pretty strident at times. Don’t your employers, if you’re going to work for an MSNBC, have every right to say your style needs some adjustment. Why does that tick you off so much?”

However, Uygur insisted his removal from the show was not about his style, and after watching a recent 60 Minutes piece on Al Sharpton, Uygur may have figured out what it was truly about:

“So the guy [Uygur] who was criticizing the President is out, even though he had really good ratings, and the guy [Sharpton] who has decided not to criticize the President about anything is in [in an interview, Sharpton told 60 Minutes that he will not criticize Obama]. That’s interesting.”

Just as Uygur began to claim no one in the media is saying what he says, that both Democrats and Republicans are screwing Americans, Kurtz ran out of time. Yet just like Keith Olbermann offered, Kurtz too suggested that Uygur might be back since he’s now “liberated.”