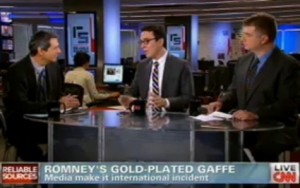 Kurtz opened the segment with a quick review of Mitt Romney’s London stumbles, after noting that “when candidate Obama (toured foreign nations) in 2008, all three network anchors flew overseas to interview him.”

Shortly thereafter, Howard asked Keli Goff to weigh in . “You saw the coverage, we saw the coverage of Obama in ’08 when he went overseas,” he said. “It’s hard to see the same approach.”

Goff correctly pointed out that the comparison was unfair, if only because there was heightened anticipation for then-Sen. Obama’s visit. “For one,” she said, “if you remember at the time that then-Senator Obama visited in 2008, polling showed that the British public overwhelmingly wanted troops out of Iraq. Since that was the centerpiece of his campaign, there was a level of jubilation, and sort of the red carpet being rolled out for the then-Senator with this idea that he would help support all of these troops coming home.”

What Kurtz and company seem to forget is that the American press, in 2008, gave loads of free airtime to Republican nominee and Senator John McCain‘s attacks on Obama as a substance-free celebrity, and the McCain campaign’s hit-job over a canceled visit to Landstuhl Regional Medical Center. The media sold “both sides,” and the public only bought one, apparently.

It’s also a silly comparison because Sen. Obama’s trip was countless degrees more difficult than Romney’s. He visited two war zones, three European capitols, and had his prayer stolen from Jerusalem’s Western Wall. Romney’s trip amounts to the World Series of Tee-ball, diplomatically speaking, and he fouled out on the first pitch.

That’s really the problem with a lot of modern media criticism (I’m not picking on Howard Kurtz; you can see this phenomenon on many media websites and news programs), the notion that there is any value in comparing the way the media covers the two “sides,” let alone the emphasis on that coverage to the exclusion of the merits of that coverage. It is absurd to suggest that the press ought to pretend that Obama stepped on his dick overseas if he didn’t, or to ignore it when Romney actually did. That’s not fairness, and yet it is that everybody-gets-the-same-trophy ethos which is destroying journalism. The two “sides” don’t get treated the same because they’re not the same.

In fact, why isn’t the press reporting on the chasm between the Obama campaign’s treatment of Romney’s trip, versus the McCain campaign’s relentless attacks on Sen. Obama as he traveled the world in 2008? The President’s team has been largely silent this go-round, whereas the McCain team held conference calls to attack Obama while he was abroad, put out an Onion-style press kit for the trip, and the RNC even attacked Obama for not going to Iraq…a week after he had gone to Iraq.

The Kurtz panel also discussed the substance of Romney’s gaffe, generally agreeing that Romney essentially got in trouble for speaking the truth, and Kurtz dismissed it as an “utterly manufactured” controversy. This assessment misses the point on several counts.

First of all, the relative truth of Romney’s security-related comments is moot; he could have as easily mentioned them by saying “Despite some early setbacks, they seem to have pulled it together, and I’m looking forward to a great games, in a great city.” Boom, pow, done. A kindergarten PR flack could’ve handled that one, and Romney’s failure illustrates a legitimate concern about his diplomatic chops.

But the second part of his answer, missed (as Kurtz pointed out) by America-centric journalists, was legitimately offensive. Can yo imagine if Romney (or President Obama) had wondered if the American people would “come together and celebrate the Olympic moment?”

The conservative press is especially adept at pushing this idea that both sides should get the same amount of positive or negative coverage, no matter the facts, or that neutrality somehow equals fairness (some say Obama’s a Christian, while others claim he’s the Anti-Christ. Discuss amongst yourselves), and the mainstream media has been falling for it for years. Media critics, stop asking if political coverage is “evenhanded” or “balanced,” and start deciding whether it is accurate and fair.

Here’s the clip, from Reliable Sources: