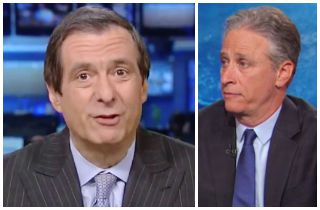 This final rant was spawned by reports of Stewart’s visits to the White House. Stewart explained he wasn’t colluding with President Obama to promote his policies, they just chatted, even debated, with the president telling him he’s making young people too cynical.

That led to Kurtz and guest David Zurawik to really go after Stewart, with talk of Stewart being an Obama “propagandist.” This all culminated in Stewart’s final Fox takedown, pointing out that 1) he’s been tough on the White House, and 2) Fox didn’t actually back up its assertions with facts.

Kurtz said today Stewart was “awfully defensive” and that he did try to be fair to him.

He maintained that “Jon’s liberal worldview that prompts him to frame most segments in a certain way” and pointed out that all of his interviews with Obama were “very friendly.”

It’s probably worth noting here that Kurtz complained about Stewart’s selective editing, but a clip he played of Stewart cut off before something rather unflattering he pointed out about Fox News CEO Roger Ailes.

And you can watch Stewart’s final Fox takedown here, via Comedy Central: