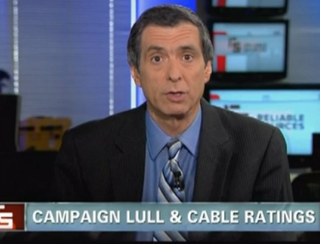 Howard Kurtz opened Reliable Sources with something of a look in the mirror today– a panel on cable news ratings, and how a network like CNN (and even Fox News and MSNBC, who are also in a current ratings decline) can compete in a bad news cycle. In discussing whether the ratings problem was a programming one or a greater decline in the use of television, Kurtz pointed out that CNN is also competing by offering an image of objectivity, one that appears in stark contrast with MSNBC and Fox News, as was made obvious on the night of the Wisconsin recall.

RELATED: CNN’s Howard Kurtz: MSNBC’s Tamron Hall Was ‘Being Insulting’ To Tim Carney By Cutting Him Off

“I don’t think the public will pay much attention again until the conventions or the debates, but the cable news channels don’t seem to know that,” panelist Terence Smith noted, arguing that the amount of drama in the Republican primaries had dried up significantly, and there is little that news channels can do to generate more. Paul Farhi noted that most television was “in decline,” and news networks know “you can’t reply on the news cycle” so they reply on partisanship, which led Kurtz to question whether “viewers [are] turned off by the way cable news covers politics.” The panel all agreed they were– a point first made by Christina Bellantoni, and added to by Smith, who suggested the networks “try some substance and see what people might see in it.”

Kurtz brought up the fact that CNN in particular had had a ratings issue, though all networks were going through a “seasonal blip.” Farhi made the point that CNN going for partisan programming at this point may also not work, as it “would be dividing a market” that already exists. Kurtz agreed, noting that the Wisconsin primaries proved that clearly. “It was like watching two parallel universes,” Kurtz argued, switching from Lawrence O’Donnell calling the primaries a “victory for Barack Obama” and Fox News’ conservative commentators celebrating the win.

Farhi made the point that even in hard news cycles when this is less true, that might not mean steady growth– cable news channel viewership grew 1% last year, he noted, despite the large amount of hard news.