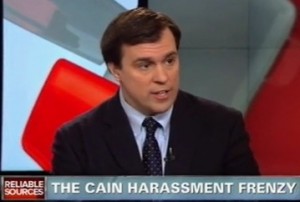 On CNN’s Reliable Sources Sunday morning, host Howard Kurtz gave Politico reporter Jonathan Martin a grilling worthy of Bobby Flay over whether the online paper had enough to publish its story on sexual harassment allegations against GOP frontrunner Herman Cain. The answer to that question was obvious, and gave short shrift to several more interesting questions that Kurtz touched on, but that didn’t quite connect.

Kurtz began by asking Jonathan Martin to discuss Politico’s story, and “what it didn’t contain in details.”

He ticked off some of the language from Politico‘s story, which contained somewhat general (but not vague) descriptions of the allegations, then asked, “Why publish the story then when you couldn’t answer the central question, what precisely is herman cain alleged to have done with these women?”

Martin’s response was to point out that their story was well-sourced (“half a dozen sources”), and has been corroborated by other news organizations, as well as the Cain campaign. As to the story’s newsworthiness, Martin didn’t get a single taker when he asked what journalist would not have printed such a story.

Kurtz pressed the issue of whether the report should have been published at all, questioning the “go or no-go decision,” and suggesting that “in a lot of news organizations, an editor would have said, ‘you have done some terrific reporting, you have great leads here, but you don’t have it.'”

Martin countered by pointing out that there was a level of specificity to the allegations they printed (“an explicit sexual overture”) that, while falling short of chapter and verse, certainly met the bar for newsworthiness.

There’s nothing wrong with Kurtz questioning Politico’s reporting, of course (that’s his job), but this appears to be a missed opportunity for him to bring his own expertise as a journalist to bear. Kurtz also questioned Politico’s decision not to print the names of the accusers, when he well knows that such a move would have been inherently unfair, given the legal gag that bound them, and the fact that the women (who are, presumably, not public figures) were not sources in the story. It’s also customary for journalists to exercise additional restraint regarding the identities of victims in sexual offenses.

Rather than ask whether the report should have been published at all (a valid question, but one that should have been quickly disposed of), news consumers would have been much better served had Kurtz asked Martin to explain why the report didn’t contain more detail. Politico‘s reporting indicates that they have more detail than they’ve printed (“In one case, POLITICO has seen documentation describing the allegations and showing that the restaurant association formally resolved the matter”), and Jonathan Martin indicated the same to Kurtz. “…we were dealing with sensitive, you know, sources. Sensitive information here, and so obviously we tread delicately when it came to that,” Martin said.

This, and other aspects of this story, would benefit greatly from some examination of the reporting process. Kurtz didn’t follow up, but my read on Martin’s response is that decisions on the level of detail were based, at least partially, on negotiations with Politico’s sources (I’ve reached out to Martin for confirmation).

Perhaps it’s a function of television’s dominance, where you can usually just see what people are saying, but people don’t seem to realize that print journalism relies heavily on a series of such negotiations, and they’re rarely simple. Most sources want to remain as anonymous as possible (if their information was easy to reveal, you’d already know it), while reporters try to negotiate as close to on the record as possible, which often includes trying to nail down as specific an attribution as possible (“a former board member” as opposed to “a source close to the situation”) to an unnamed source.

These negotiations are both invisible and self-evident to the reader. If a source is unnamed, or an on-the-record source is attributed on background, you can bet that the reporter tried, and failed, to get tighter attribution.

In the case of the Cain story, whomever it was that allowed Politico to inspect the document, and their other sources, likely insisted on a certain level of discretion in how the details were revealed. That’s what Jonathan Martin’s response appears to indicate, but if that’s not the case, and it was purely an editorial judgment, then that’s a different story. It’s possible the specifics of the allegations were overly prejudicial, although leaving those specifics to the imagination doesn’t seem much better.

There’s also a misperception among Politico’s critics that their report relied only on anonymous sources, and that all anonymous sources are created equal. Neither is true. The unnamed sources used were, for the most part, strongly attributed, and were supported by documents that the reporters reviewed, and partially corroborated (and pointedly not denied) by the Cain campaign in the report itself. Martin even confirms to Kurtz that Cain’s reaction was a factor in determining whether to publish.

There are few news stories that would not benefit from more detail, tighter sourcing, or smoking-gun documentation, but it’s important for media critics to reinforce the true boundaries of good journalism, rather than allow those who seek to discredit mainstream journalism move the goalposts out of reach.

I think Jonathan’s television appearance stuck to the outlines we have shared with readers on the site.

We are not able to go beyond that in responding to inquiries about our sourcing and decision-making.

I recognize that is frustrating to people who quite naturally are curious and want to know more, and frustrating to us because our natural inclination is to share what we know, but it’s necessary on a sensitive story like this.