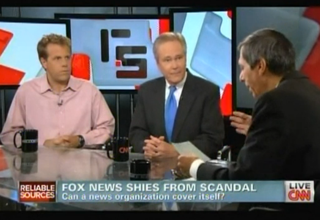 As the News of the World phone hacking scandal continues to claim scalps, the coverage– or lack thereof– of the story on its sister organization Fox News continues to claim headlines. On today’s Reliable Sources, host Howard Kurtz, admitting he felt “very strongly” about the issue, chided Fox News for keeping quiet, noting that “when CNN has controversy, we always do it” and that, by not covering the scandal, the network “undermines its credibility.”

Kurtz welcomed to his panel today former Carter speechwriter James Fallows and Washington Post blogger Eric Wemple, both who expressed little sympathy for News Corporation and its entanglement in the scandal. Kurtz opened the chat proposing that, as much as many criticize Fox News for not devoting as much coverage as other networks to the matter, a risk existed, perhaps, that the network would be accused of “putting out some kind of sanitized version” of the story. Fallows argued that, yes, expecting them to be at the forefront of coverage on their sister organization’s corruption was unwieldy, but “it’s realistic to expect them to devote some coverage.” Wemple agreed: “there is a difference between responsibility and expecting them to be at the forefront.” Wemple also argued that they had to cover it because it was a juicy story, and “if they fully ignore it, they’ll push people elsewhere.”

As a media reporter, Kurtz admitted that the story was somewhat personal to him. “When CNN has controversy, we always do it,” he noted, and he expected the same of his analogs at Fox News. Otherwise, he argued, the network sends the message that “we’re only aggressive when someone else is in trouble.” He also called the Fox News Watch commercial segment on the topic, where the panel decided not to talk about it at all, “an embarrassment” but considered the possibility, as Cal Thomas argued the week after that segment, that those who are competitors are covering the story with more zeal because of their interests in it.

To that claim, Wemple argued that it was News Corp who were playing up the story by virtue of so many people in their organization being involved in it and stepping down, but refrained from attacking the American side of the organization too much because journalistic standards in America are “vastly superior” to those of Britain (with the exception of the New York Post). Fallows agreed in part: “the range from high to low [standards] is broader than in the United States.”