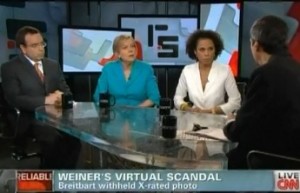 In addition to speaking with Kirsten Powers regarding Congressman Anthony Weiner’s ongoing scandal, Howard Kurtz spoke with a panel of guests regarding another key player in the unraveling story: Andrew Breitbart. Kurtz wondered whether Breitbart did anything wrong in releasing the information he had on Weiner, and although Kurtz thought Breitbart was blameless on this story, Dana Milbank wasn’t pleased with how Breitbart allowed the most explicit photo of Weiner to be exposed.

Kurtz remarked on how the picture was released despite Breitbart’s intentions, “I take Breitbart at his word that he didn’t know that somebody on the Opie & Anthony staff was going to snap a picture of the picture.” Milbank wasn’t buying Breitbart’s argument and instead echoed the belief of some who thought this was just a convenient way for Breitbart to get the photo out there.

Kurtz defended Breitbart here, responding “you’re just annoyed because Breitbart, who doesn’t like the liberal media, is actually getting some credit on this story.” Milbank disputed that assertion, believing the story has just reached the overkill point now. Yet even if during this exchange Kurtz painted Breitbart in a fair and favorable light, it doesn’t seem Breitbart is happy. Today on Twitter, Breitbart revealed he is not pleased with the fact that he is never invited on the show to defend himself. Is this something that might be remedied in the future, since it now seems like Kurtz might consider Breitbart to be a reliable source?