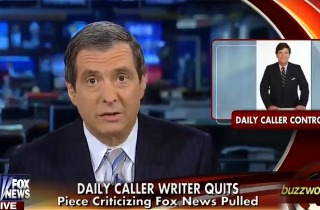 On this Sunday’s MedizBuzz, host Howard Kurtz dedicated 23 seconds to the controversy surrounding the resignation of a Daily Caller columnist after the site’s founder Tucker Carlson nixed a piece critical of Fox News.

“He said it was a rule, and he wouldn’t be able to change that rule. So I told him I quit,” Kaus explained to Politico. “I just don’t see how you can put out a publication with that kind of giant no-go area. It’s not like we’re owned by Joe’s Muffler Shop, so we just can’t write about Joe’s Muffler shop.”

And on Sunday’s Reliable Sources, Kaus told CNN host Brian Stelter that “everybody is scared of Fox,” especially conservative media outlets that rely upon the network for introducing their work to a cable news audience.

Towards the end of his MediaBuzz show, Kurtz had only this to say about the ordeal:

Tucker Carlson, the founder of The Daily Caller website, is also the co-host of Fox & Friends Weekend. One of his columnists, Mickey Kaus, quit after Carlson, citing his role at the network, killed a piece saying Fox News isn’t being critical enough on immigration reform. Carlson told me he gives his writers vast editorial freedom but makes an exception for Fox because you don’t go after your employer. That, unfortunately, helps undercut his site’s independence.

Indeeed, such a statement almost suggests — wrongfully — that The Daily Caller is just an outpost of Fox News. One question worth discussing below in the comments: Would it suffice for Caller writers to simply disclose the relationship in anti-Fox pieces and maintain that their views do not necessarily reflect that of Carlson’s?