Howard Stern Asks Letterman: Why Would You Have That ‘Creep’ Leno on Your Last Show?
VIDEO

Howard Stern Asks Letterman: Why Would You Have That ‘Creep’ Leno on Your Last Show? 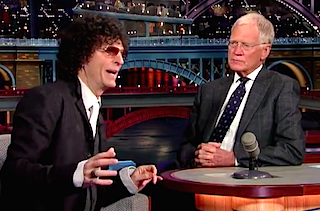 CBS has not yet announced the guests for David Letterman‘s last three shows as host of the Late Show, leaving open the rumored possibility that his longtime late night rival Jay Leno could appear on one of the final broadcasts. Based on this week’s lineup, Bill Murray and Tom Hanks are good bets for next week while Brian Williams still feels like a long shot.

As could have been expected, Howard Stern attempted to stoke the speculation and controversy during his final appearance on the Late Show Monday night, asking Letterman, “Are you thinking about Jay Leno on next week for your last guest?” He added, “Are you serious? Are you out of your mind?”

When Letterman played dumb, asking his producers, “Is that happening?” they would only confirm that they did extend an offer to the former Tonight Show host.

“And he said no, that creep?” Stern asked in disgust. “Good! I don’t want him on my show, who needs him? Why would you ask him to be on?”

Letterman revealed that Leno had asked him to appear on one of the final episodes of his show last year, but he declined, saying, “That’s a lovely offer, but I think it should really be more about just Jay on his final week of shows.” He added, “I think he may feel the same way about this situation… So that’s when we called you.”

The two men proceeded to discuss who the “best guest” on their respective shows has been over the years, with Stern picked Jerry Seinfeld and Billy Joel and Letterman settling on Andy Kaufman.

While Letterman’s comments last night certainly made the prospect of a Leno sit-down next week feel a lot less likely, he did not close the door on the possibility of a surprise appearance.