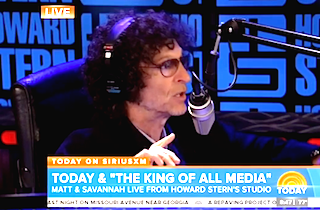 For 9 minutes Tuesday morning, Howard Stern took full control of the Today show. Instead of having the “King of All Media” sit down at NBC, hosts Matt Lauer and Savannah Guthrie ventured into Stern’s SiriusXM studio and were subjected to his borderline not-safe-for-morning television line of questioning.

Stern mostly wanted to talk about Guthrie’s pregnancy and impending maternity leave. “Do you worry about leaving the Today show? How long do you plan for maternity leave?” he asked. “If I was you, take an hour, have the baby, and get right back on.”

When Guthrie said she would be out for a few months, Stern wanted to know who NBC was bringing in to replace her, mentioning former host Katie Couric as a possible option. Guthrie would neither confirm nor deny that rumor, but did say NBC could have some “surprises” up its sleeve.

But things really started to heat up when Stern started coming up with ways for the Today show to boost ratings surround the birth. “Here’s the part I warned you about,” Lauer told Guthrie as Stern started off an a rant about postpartum depression.

“Wouldn’t it be great? Let me spell out my scenario,” Stern fantasized. “Savannah has the baby. Gorgeous baby, healthy baby, we know that… Savannah then has postpartum depression, comes back to the Today show, kills Matt on camera… Wouldn’t that be amazing?”

“It would be,” Lauer answered. “You should program the Today show.”