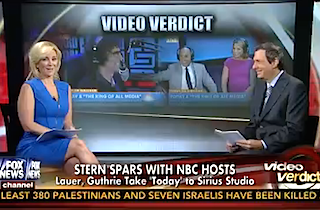 Howard Stern is pretty sure there’s something going on between Fox News’ Howard Kurtz and his MediaBuzz co-host Lauren Ashburn. After the pair spent some time critiquing his interview with Today show hosts Matt Lauer and Savannah Guthrie, Stern revealed on his SiruisXM show this week that he’s heard rumors that Kurtz is “doing” Ashburn.

The discussion was prompted by a question from frequent caller Tommy from Malden, who wanted to know what Stern thought about seeing himself on MediaBuzz. Stern began by trying to explain the “Video Verdict” segment that Kurtz and Ashburn present at the end of each show, in which they give a rating between one and 10 to various media clips from that week.

“He’s there with a woman, who I understand is his girlfriend,” Stern said, saying that’s what someone wrote to him. He agreed with his caller that Ashburn is “pretty hot,” adding, “I think he’s doing her.” After saying the whole segment made no sense to him, Stern suggested, “maybe it’s an excuse to get his girlfriend on.”

“I figured Howie Kurtz never got laid,” Stern said of the married Fox host. “And now he’s banging a hot chick, good for him.”

Despite all that gossip being said, Stern added that he thinks it’s a “good show.”

Whatever the relationship between Kurtz and Ashburn may be, their careers have closely aligned over the last couple of years. Kurtz worked closely with Ashburn on her website The Daily Download, producing short media criticism clips that appeared online. Both pundits worked for The Daily Beast until Kurtz was dropped by the outlet shortly after posting an erroneous column about NBA player Jason Collins’ coming-out essay.

Ashburn frequently appeared on CNN’s Reliable Sources when Kurtz was still hosting, after years of reporting for various networks. And when Kurtz moved over to Fox to start MediaBuzz, Ashburn soon followed.

And you can watch the MediaBuzz segment they discuss below, via Fox News:

[Update: This post has been updated to more accurately reflect Ashburn’s biographic information.]