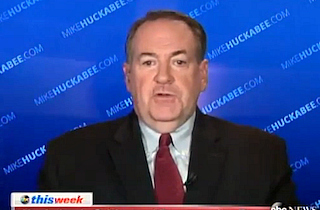 Former Arkansas Governor and potential 2016 candidate Mike Huckabee criticized the Obamas in his newly-released book for letting their daughters listen to Beyoncé, which drew quick charges of hypocrisy given the former Fox host’s coziness with musicians like Ted Nugent. On ABC News’ This Week Sunday morning Huckabee attempted to crab walk around his earlier comment, claiming he wasn’t directly criticizing Beyoncé or the Obamas.

“Beyoncé is a wonderful talent,” Huckabee said. “My point is, she doesn’t have to do some of the things that she does in the lyrics, because it’s not necessary. She has nothing to make up for. She’s an amazing talent.”

RELATED: A Brief History of Conservative Pundits Hatin’ on Beyoncé

“My point was, even in speaking about the Obamas — and I said about them in the book, they’re great parents. But it was President Obama in an interview with Glamour who said that some of the lyrics he won’t listen to with his daughters because it embarrasses him. If it embarrasses you then why would you possibly think it’s wholesome for your children to put it into their heads?”

“If you’re very concerned about what happens with your children — and the Obamas are. They’re great parents. They’re careful about making sure their kids get a lot of vegetables and eat right. That’s terrific. But what you put in your brain is also important as well as what you put into your body and that was my point based on what the president, himself, said.”

Political watchers were not impressed:

On @ThisWeekABC Huck follows '08 pattern on @Beyonce & running vs women: say one thing to base & then dances in msm. Will catch up to him