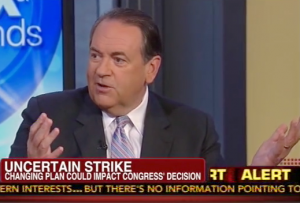 Mike Huckabee joined the Fox & Friends crew on Saturday to discuss the latest news on potential military strikes in Syria. After explaining his hesitance, Huckabee tore into a Democratic congresswoman for her “insane rationale” in how she would vote on Syria and Hollywood liberals for being so vocal about war under George W. Bush but staying quiet about Syria so they don’t look “anti-black.”

Huckabee said the Obama administration’s Syria plans keep changing to “wherever the political trends are going,” adding that while the U.S. should strongly condemn the use of chemical weapons, there’s not sufficient evidence to suggest military action is the best course. He also warned that launching missiles at chemical weapons reserves would dissipate gas into the air and kill more people.

Tucker Carlson brought up Congresswoman Eleanor Holmes Norton‘s comments that the only reason she would vote for the Syria resolution would be so that Obama wouldn’t be “shamed.” Huckabee called that an “insane rationale for launching a military strike,” since members of Congress generally need to think about the Constitution when they vote and not the president’s public relations.

Alisyn Camerota asked Huckabee about Ed Asner‘s candid remarks about Hollywood backing away from criticizing Obama on Syria because they don’t want to look “anti-black.” Huckabee said this is clear and unqualified “racism in its rawest form,” made so much worse by the “duplicity of people who think they’re so open-minded.”