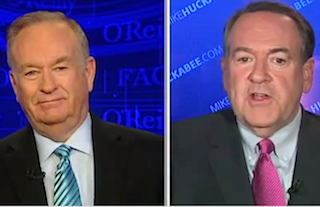 Mike Huckabee no longer has a weekly show on Fox News, but the probable 2016 presidential candidate still had a platform on the network Tuesday night thanks to Bill O’Reilly.

Last night, The O’Reilly Factor host grilled Huckabee about his plan to “defeat the jihad,” to which the former Arkansas governor said his first step would be labeling terrorists “Islamic,” something the Obama Administration has been more hesitant to do. Beyond that, he said he would consider cutting off U.S. relations with Pakistan and would definitely cut off support to the United Nations.

Later in the interview, O’Reilly asked Huckabee if he thinks he can be elected as a religious man in the “secular society” that we have now in this country (still estimated to be between 60-80% Christian according to various studies).

Huckabee proceeded to downplay his own personal religious history, saying he hasn’t served a Baptist minister for 25 years and did not replace the “capitol dome with a steeple” as some would suggest. “I don’t think I should be disqualified from office because I’m an unapologetic believer,” he said.

Then, he tied the two issues together. “We don’t want to call Islamic jihadism what it is because we don’t want to offend somebody, because we might hurt their feelings over their religion,” Huckabee suggested. “And yet the national press” — excluding O’Reilly — “all they want to say is ‘I don’t think Mike Huckabee could be president because he’s religious.’ Now do you not see the irony in that?”