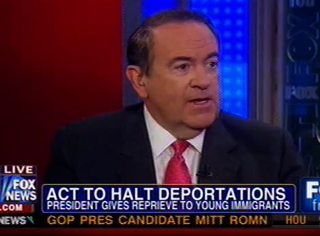 Mike Huckabee told the crew at Fox & Friends this morning that he understood his stance on immigration was not particularly popular among Republicans, and he didn’t support and executive order for it, but the policy President Obama tried to implement for young undocumented people was something he had also attempted to pass in Arkansas. “You don’t punish a kid for what his or her parents did,” he argued, saying the policy was not a “job-killer.”

“The content itself, the goal, it’s an admirable thing,” Huckabee argued, adding that he had “tried to pass a similar measure in Arkansas,” but it failed in Congress and he let it lie. “It never occurred to me that I could simply bypass the legislature and do what I wanted to do,” he added, calling it “basic constitutional 101,” so much so that the President had previously said himself that he could not pass the bill along.

Dave Briggs came back to the policy rather than the way it was implemented, asking whether it was a “job-killer,” which Huckabee said was “not necessarily” the case, since the people affected are educated in the United States, many of them proven very intelligent. “You don’t punish a kid for what his or her parents did,” adding that this stance “makes me very unpopular with a lot of Republicans.” Alisyn Camerota noted he was not alone among Republicans, either, with Sen. Marco Rubio and John McCain pushing modified versions of the act.

“This isn’t amnesty,” Huckabee explained, but a “pathway to become legal” for people for whom “it doesnt make sense to throw you out because you’ve done well.” He was not soft on President Obama, however, who he said had no leadership skills. “If he had ever been governor or mayor or even sheriff, [he’d know] you have the opposition and figure out how to make them work.”