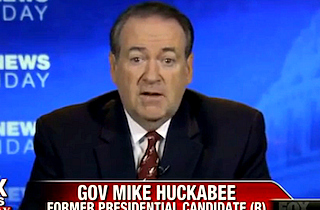 Former radio host and soon to be publisher Mike Huckabee appeared on Fox News Sunday and told host Chris Wallace that the views on homosexuality expressed by suspended Duck Dynasty star Phil Robertson were the same as those expressed by then-candidate Barack Obama in 2008 on same-sex marriage.

“There’s a new level of bullying on the part of these militant activist groups,” Huckabee said. “If anyone says something that holds to the same position that Barack Obama held in 2008, when he was at the Saddleback Church with John McCain—[he] made it clear very clear that he opposed same sex marriage, and he said he did so because he was a Christian and because of his biblical views. Well, if that position was okay in 2008, how come it isn’t okay in 2013, or 2014?”

Wallace found this hard to buy. “It isn’t just the fact that Phil Robertson said that he disagreed with it and felt it was a sin,” Wallace said, and reiterated Robertson’s comments, which also included remarks about how happy African-Americans were during the Jim Crow era. “Are you not offended by any of that?” Wallace asked. “Not the substance, but the way he expressed it?”

“He said it in a way that would probably be more appropriate for the duck woods than the pages of a major news magazine,” Huckabee said. “But this issue was never about those comments. This issue was specifically about GLAAD and the Human Rights Campaign protesting to A&E over his comments regarding same-sex relationships.”