Huckabee Goes Machiavelli On Red Eye: ‘I’d Rather [America] Be Feared Than Liked’ 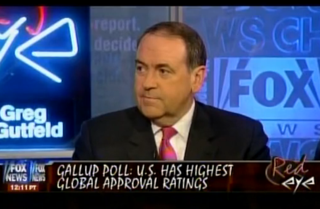 Mike Huckabee tends to define himself as a candidate on his social and domestic issues, but despite appearing as a Fox News personality and not 2012 presidential candidate on Red Eye, he took the time to delve into foreign policy. Discussing recently polls showing America’s popularity around the world surging under President Obama, Huckabee disapproved of what he classified as an apologetic foreign policy, and instead proposed America be “feared rather than liked.”

The poll showing America topping popularity polls also showed the U.S. straggling at sixth place under the Bush administration, the results of which left host Greg Gutfeld wondering just how relevant America’s popularity around the world is to the state of the nation. While other panelists seemed apathetic towards America’s popularity– musician Jeff “Skunk” Baxter in particular noted that among the things that made America popular around the world was the show Baywatch— Huckabee seemed concerned by it.

Huckabee made it abundantly clear he couldn’t care less what the rest of the world thought: “I’d rather us be feared that liked,” he told Gutfeld, adding that “I don’t want everybody to love us and like us if they’re still going to pick on us and kick sand in our eyes.” The fear versus love dichotomy, of course, is an allusion of The Prince, though he later articulated support for some sort of brinkmanship: “I’d much rather them be so afraid that the U.S., with its power, would ever use it, that we never have to use it.”

Of course, Huckabee didn’t get out of making this statement unscathed, with Gutfeld jokingly agreeing that “peace through fear” is the solution and, later, Andy Levy pouncing on his strongarm philosophy during the Halftime Report. Pretending to confirm his accurate recitation of Huckabee’s comments, Levy asked if he would be right in saying Huckabee had declared, “When I’m the glorious leader of America and there are no more elections, you’re going to see some big changes around here.” Huckabee, of course, confirmed the quote.