Huckabee: If Bashir Isn’t ‘Canned,’ MSNBC Needs to Explain ‘What Their Standards Are’ 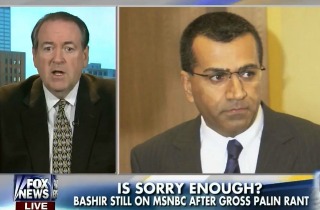 Former Arkansas Gov. Mike Huckabee joined the hosts of Fox & Friends on Wednesday morning to discuss some of the biggest media controversies of the past two weeks. When asked for his take on MSNBC host Martin Bashir’s inflammatory comments about former Alaska Gov. Sarah Palin, Huckabee said that the host should be “canned” or it would signal that his network has an ill-defined set of acceptable standards of behavior.

Brian Kilmeade noted the apparent double standard in the fact that MSNBC recently let former host Alec Baldwin go over anti-gay remarks he made in the streets of New York City but is not disciplining Bashir over his scripted on-air remarks.

“Martin Bashir must have some really incriminating photos of executives at MSNBC,” Huckabee submitted. “There’s no other explanation for why this guy is still on the air.”

RELATED: Christopher: Why Everyone Calling for Martin Bashir’s Head Needs to Pipe Down

Huckabee said that Baldwin “needs to go to anger management,” but Bashir’s intentional and vetted remarks are more troubling.

“The fact is that, for him to remain on air saying some of the most vile, just disgusting, despicable things about another human being really should mean that he gets canned,” he added. “If MSNBC keeps Martin Bashir — right now he’s getting a nice little vacation, they say, that was already planned — but if he comes back, then I think they’ve got, as Rickey Ricardo would say, they’ve got some ‘splaining to do as what their standards are.”

Turning to CBS reporter Lara Logan, who was recently suspended along with her 60 Minutes producer after airing a misleading and poorly sourced report on the Benghazi attacks, Kilmeade said he was “shocked.”

“Very shocked,” Huckabee said. “We still don’t know what happened in Benghazi. Our government lied to us. They covered it up.”

“Lara Logan is certainly a hero journalist, at least to attempt to get the story out,” he concluded.