Huckabee: Ignoring Catholic Lawsuits Against Obama ‘Like Not Covering The ‘I Have A Dream’ Speech’ 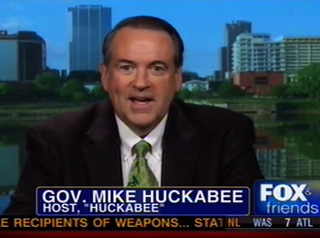 Former Arkansas Governor Mike Huckabee told Fox & Friends this morning that he could not see how a media organization could ignore as large a story as 43 Catholic groups suing President Obama over the right not to provide employees with contraceptive insurance coverage. After discussing the jobs numbers (ones he found questionable in their positive light on the President), Huckabee compared the lawsuit to Roe v. Wade or Brown v. Board of Education on the scale of nationally impacting lawsuits.

“This is one of those pants-on-fire moments,” Huckabee said of President Obama’s job claims, quoting Stanley Ross as saying “figures lie, and liars figure… you can twist numbers to say anything you want them to mean.” He then explained ways to make the spending numbers look better, a logic he compared to “blaming George Bush for gaffes that Joe Biden made in 2009.” “It’s all very convoluted, and quite creative,” he noted.

Host Alisyn Camerota then asked about the lawsuits Catholic groups have put together to sue the President after he attempted to mandate they provide contraceptive coverage. ” “It’s like not covering the ‘I Have a Dream’ speech,” Huckabee replied, “it’s like missing Roe v. Wade… Brown v. Board of Education.” Calling the lawsuit “one of the most significant historic lawsuits” in recent memory, he explained that “the largest Christian body in the world suing the President of the United States– that’s not small potatoes.” He called the suit a “resort by people of conviction and faith,” one the media should shine a brighter light on.