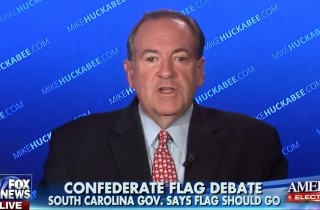 Following the deadly Charleston church shooting that left nine black congregants dead last week, America has been thrust into a larger conversation about racism and how it lingers throughout elements of Southern culture. Former Gov. Mike Huckabee (R-AR) thinks any such conversations are unproductive, and would rather see people converting to Christianity.

The remark came during a Tuesday appearance on Fox & Friends, in which guest-host Ed Henry grilled the former governor on his “punting” of the Confederate flag issue as a “state issue,” despite claiming Americans are looking for a forceful leader.

“I didn’t punt at all,” Huckabee declared. “As a frequent visitor to South Carolina, I look at this objectively: You’ve got a female governor who is of Indian descent, you have the only elected African-American U.S. senator in the South from a state of 4.8 million people, elected largely by people who are mostly white. That’s not racism.”

And now that Gov. Nikki Haley (R-SC) called upon her state’s legislators to remove the Confederate flag from Statehouse grounds, Huckabee applauds her decision, but still thinks the entire race-based response to the shootings is misguided.

He concluded: “When I love God and I know that God created other people regardless of their color as much as He made me, I don’t have a problem with racism. It’s solved!”