Huckabee: Obama On Debt Is Like A ‘Cowboy Riding A Stick Horse In The Kentucky Derby’ 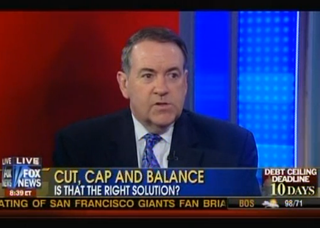 President Barack Obama was not exactly a happy camper about his negotiations with the legislature collapsing entirely yesterday, with the clock ticking towards a national debt default. On this morning’s Fox & Friends, Mike Huckabee went as far as to call the President’s “visibly angry” demeanor not befitting a president, lamenting his “amateur hour” speech and comparing him to a “cowboy riding a stick horse in the Kentucky Derby.”

“The tempers are so hot,” Huckabee told the Fox & Friends crew, that he couldn’t see a swift compromise, but he attributed the problem to the President. “He is no longer rising above it as a President must do,” he argued– “and that’s something I have not seen in many presidents.” “The executive has to rise above the level of the legislature,” Huckabee advised when asked what would be different had President Huckabee been in power today. “He was beneath the situation last night.”

He did not have similarly harsh words for House Speaker John Boehner, who he admitted was “blunt” but “did not, to me, get into a lot of the sort of personal and petty kind of details that I had seen in the President and his 30-minute tirade.” He did not indicate what, precisely, was personal about the President’s speech, aside from the tone, though that seemed to be sufficiently unprofessional for Huckabee that he saw no long-term solution for the debt problem, suggesting it was probable they would agree to “kick the can down the road.”